Five Nights at Freddy's Wiki
Register
Don't have an account?
Sign In
Advertisement
in: Articles with Maintenance Issues, Stub, Pages with Empty Sections,
and 3 more

Youtooz Presents: Five Nights at Freddy's is an augmented reality mobile game developed by Youtooz. It was released on April 29, 2022 on Augmio to coincide with the release of Youtooz's Security Breach wave.

The player plays as a Youtooz employee, temporarily housing the new line of Youtooz collectibles. Before the game starts, the player receives a phone call from another employee explaining the nature of the Youtooz collectibles, which have been upgraded to the point of becoming miniature animatronics. The other employee warns that the figures may climb out of their boxes and that the player can lure them back in using their light sensors, making them think that they are on display and cease movement.

The active threats (from left to right) are Glamrock Chica, Dawko, Glamrock Freddy, Vanny, Roxanne Wolf, and Montgomery Gator. The player must save up their dwindling power supply and survive until 6AM when the toys are scheduled to be picked up. At first, the box's top will open and then the animatronics will come out of the box and move around the area. If the player is jumpscared, the screen will turn to static and a GIF of the jumpscare in a photograph will serve as the game over screen. 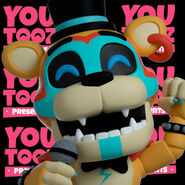