Based on several pre-existing animatronics, their suits are entirely composed out of ice and snow. 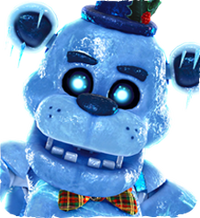 Freddy Frostbear is a Christmas counterpart of Freddy and first appeared on the Christmas update on December 25, 2019 as a separated animatronic with unique AI. He later returned on April 3, 2020 for a little while, and then appeared for the mini event on September 24, 2020 along with several event-exclusive animatronics. Freddy Frostbear returned again during the Winter Wonderland Event for a limited time. 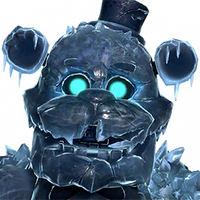 Black Ice Frostbear, just like normal Frostbear, is a Freddy variant made entirely out of ice, but his physical condition has gotten worse than before. Black Ice Frostbear is noticeably darker in color, and is covered in more ice, with spikes spewing out of his arms, legs and shoulders. His jaw is noticeably more jagged, and his snout is somewhat smaller, but has multiple spikes sticking out of it. Finally, his torso and top hat feature large gashes within them, making his endoskeleton visible in the torso. His top hat and bow tie are now lacking Christmas themes, losing the mistletoe on his top hat and his bow tie being colored dark blue. He also carries an icy spear with a spiked trident tip, as opposed to his long icicle. 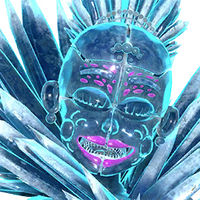 Arctic Ballora is nearly identical to Ballora, but she is completely made out of ice with a few ice-spikes sticking out of her arms and legs. She has pink makeup and jewelry on her face and stomach, as well as her top now being pink and in a slightly different shape. Her cheeks get outlined by glowing blue circles, with small blue dashes shooting away from them. Finally, her tutu is made entirely out of icicles, and is accompanied by an icicle ruff and icicle crown. As seen in her jumpscare, her endoskeleton face, much like the rest of her body, is also made out of ice, with her eyes being a glowing teal color, matching her similarly colored, icy exterior. 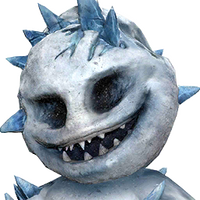 Frostbite Balloon Boy is a version of Balloon Boy, and the third winter animatronic skin released on December 17, 2020. He is Balloon Boy's second skin, after Swamp Balloon Boy in the Haunted Forest Event.

Frostbite Balloon Boy is almost entirely different from Balloon Boy in body shape, as he has been slimmed down. As well as this, he is made entirely out of snow, with icicles sticking out of him and a large chunk of his torso taken out showing dark blue ice on the inside of his body. His balloon and sign are also made of snow with icicles sticking out, as well as his sign now saying "Avalanche!" rather than "Balloons!". Finally, his face is made to be totally different and much more sinister looking, with his eyes gone and his eye sockets in a more triangular shape, while his smile appearing as wider with sharper teeth. 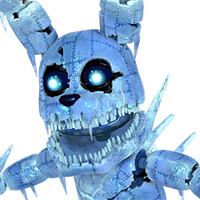 Frost Plushtrap is nearly identical to Plushtrap, but he is completely made out of ice. He has icicles all over his body, similar to Freddy Frostbear. He also has icy blue irises. He resides in an alternate version of the warehouse-like environment of the original Plushtrap, only this version is covered with snow and ice. The machinery used to charge up electricity is also somewhat frozen over and covered with ice.