"Piranha Plushtrap" redirects here. Were you looking for the Piranha enemies from Freddy in Space 2?

The Wicked Tides animatronics have appearances themed around the sea and are mutated, humanoid versions of sea creatures. 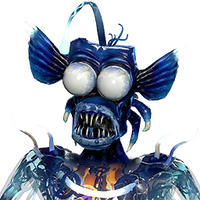 Dark Water Endo is primarily based on the species of anglerfish. His entire body glows a luminescent blue with small white tendrils sprouting out of Dark Water Endo's arms. Similarly to actual anglerfish, Dark Water Endo has hollow white eyesockets, large gills for ears, a large puckered lip filled with pointy teeth and a glowlight fin atop his head. He has four fingers per hand and two toes per foot. The hands are a dark black while his fingertips glow white in contrast. The center of his body has a large splash that's mixed with colors of sparkly orange, yellow and purple, which is also covered somewhat by white lines. 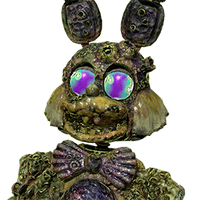 Unlike the other two animatronics, Sunken Toy Bonnie is based more on the environment of the sea rather than a specific sea creature. His entire body is comprised of sea rock mostly covered in green algae. Sunken Toy Bonnie's ears are made from coral, his cheeks are clam shells, his bow-tie is made from seashells and the round spot on his belly is made from what appears to be either a rock or some form of egg. His eyes are once again hollow lacking pupils and appear to be either bubbles or shining pearls. 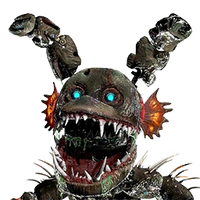 Piranha Plushtrap is based on a piranha as the name suggests. His suit color is slightly darker, but still a shade of dark green like his original counterpart. His mouth is open wide with sharp teeth in various sizes protruding out of his mouth and even sticking out of his arms. Piranha Plushtrap has two sets of ears; his regular rabbit ears and orange piranha ears strapped to the side of his head. His eyes are the same color as his suit, with cyan pupils glowing from them. His three fingers are attached together by stubs of pink flesh. His chest has been torn open, revealing his sharp and spiky rib cage. In one of his renders, a strange green ooze is spilling out of both his mouth and open stomach, despite being an animatronic.

As for Piranha Plushtrap's new environment, it appears to be in a sunken pirate ship, filled with barrels, coral and seaweed. One of the ship's walls are gone, allowing the player seeing the light of the ocean ahead of them. The electronic devices used to charge up the shocker are inserted into the ship's wood frame and are somewhat covered with algae from decay.