The Wet Floor Bot is a robot of Freddy Fazbear's Mega Pizzaplex. They appear in Five Nights at Freddy's: Security Breach.

It is small yellow robot around Gregory's height. The bots were designed with two glowing light eyes and has the "CAUTION WET FLOOR" sign with Glamrock Freddy slipping on the water.

It was suggested that the Wet Floor Bot acts as a warning towards customers like regular wet floor signs do whenever there is a wet floor present. However, since Wet Floor Bot is a service robot, it is implied that it cleans and polishes the wet floor up to prevent customers from slipping and falling.

The Wet Floor Bots appear in groups and only serve as background props that do not play a major role in the game, as they only stay in their spot. They are mostly found around bigger locations, and sometimes block out-of-order areas. The bots will do nothing but move their body to watch Gregory's movements, but some bots were found deactivated in fewer locations. Some appear to emit ambience from previous games, such as static and what sounds like garbled speech.

A Wet Floor Bot getting shot by a Fazerblaster 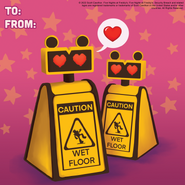 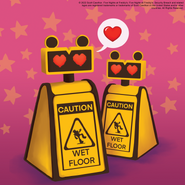 Ditto, without to and from text.
Community content is available under CC-BY-SA unless otherwise noted.
Advertisement