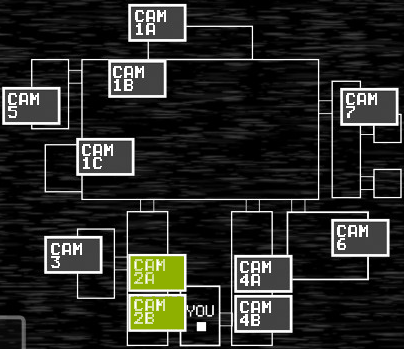 The West Hall is a location in Five Nights at Freddy's within Freddy Fazbear's Pizza. It is viewed with CAM 2A and CAM 2B. In terms of location, it is connected to The Office and the Supply Closet. Only Bonnie and Foxy use this hallway, as Chica and Freddy Fazbear use the right side of the building to progress to The Office. Freddy, however, will use this hall if the power runs out (though he is never actually seen doing so on-camera).

Note that the hallway light flickers on and off quickly, and when coming through this hallway, Bonnie can only be seen when the light fixture is on.

Foxy's sprint can be triggered by viewing the hallway. If Foxy's sprint is triggered, the player has a small amount of time to shut the left door before Foxy can get inside. Therefore, it is recommended that the player exercise caution when viewing this camera. It should be noted that Foxy will never be visible in the corner of the hall. Only Bonnie is visible in this location.

Bonnie commonly comes through this area. Activating the Hall Light while he is in the player's blind spot will show Bonnie standing in the doorway. Even if the door is closed, the player can verify if Bonnie is still there by looking for his shadow created by activating the hall light. His darkened figure can be seen through the camera, standing at the end of the hall, although the flickering ceiling light may render him difficult to make out for a few seconds. Bonnie will also appear at the corner right next to The Office.

It is interesting to note that on Night 4 and beyond (as well as on the Custom Night), when Bonnie is occupying the corner, his head will twitch and snap violently, and a sound byte also used in the Visual Hallucinations will accompany him. The same applies for Chica. This can be beneficial to the player since the sound byte is audible even if the player is not viewing him, or even if they don't have the Monitor up at all, for that matter, similarly to when Chica is in the Kitchen. If the sound byte plays alone, without any Hallucinations accompanying it, the player automatically knows that either he and/or Chica are in their corners, eliminating the need to check them. It is required to check them in the mobile version since the sound file is not present.

Also worth noting is the poster on the wall in the corner, as it can be used to summon Golden Freddy into The Office through a tedious procedure. Fortunately, this usually only occurs on Night 1 and Night 3. The poster can be 1 of 3 pictures: a bodyshot of Freddy, a distorted picture of Freddy ripping off his own head, or a head shot of Golden Freddy. If it is the latter, lowering the Monitor will make Golden Freddy appear in The Office, with flickering "IT'S ME" hallucinations and a distorted audio file playing. If the player does not raise their Monitor within one or two seconds of him appearing, Golden Freddy's kill screen will commence, and this will intentionally shut down the game. This can discourage players from frequently checking the corner, in fear of summoning him.

The West Hall (CAM 2A) is the hallway leading from the Dining Area to The Office. At the far end of the hallway, the Dining Area can be seen, as well as a light. There is a door on the left with a low light shining through. Star-shaped decorations hang from the ceiling. The walls are gray, the floor is red and blue-tiled, much like in the East Hall and the Dining Area, and the bottom of the walls are white and black-tiled and outlined in red. On the left wall, various pictures drawn by children are hung, similar to the ones inside The Office.

At the end of the hallway, viewed in CAM 2B, is a corner littered with papers and trash. On the walls hang some papers with writing on them, as well as a poster of Freddy holding out his mic with the words "Let's Party" in caps on top. There appear to be monitors of some type on the ground near the door. Star-shaped decorations hang here as well. The floor are blue-ish and black tiles. A bunch of wires seem to hang from the ceiling over the monitors near the door.

The West Hall with no lights on.

Bonnie in the West Hall.

Foxy charging towards The Office.

The distorted Freddy poster, appearing to rip his own head off.

The poster of Golden Freddy that triggers him to appear in The Office. This giggling can be heard while viewing it.

Bonnie in the W. Hall Corner.

Bonnie looking into CAM 2B as his head twitches.

Bonnie twitching on later nights. (Click to animate)
Add a photo to this gallery

Bonnie in the West Hall, brightened.

CAM 2A, brightened and saturated for clarity.

Bonnie looking into CAM 2B as his head twitches, brightened.
Add a photo to this gallery

Bonnie in the West Hall with lights during the game's trailer.
Add a photo to this gallery

The minigame image from Five Nights at Freddy's 3, displaying a gray-colored cupcake.

The Night 5 minigame image from Five Nights at Freddy's 3, displaying Shadow Bonnie.
Add a photo to this gallery