The wasteland animatronics are radioactive-themed animatronics who appeared in Five Nights at Freddy's AR: Special Delivery as limited time-only custom skins for the animatronics. They were introduced for the Wasteland Event that started on June 11, 2020, and there are only two animatronics available.

They share nearly-identical models as their pre-existing counterparts, Foxy and Springtrap. The wasteland animatronics' designs are varied, sporting features based on the effects of nuclear infections and mutations, hence their name. 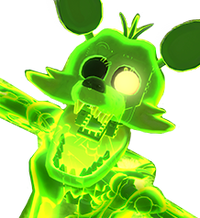 Radioactive Foxy is the first wasteland animatronic skin released on June 11, 2020. He is Foxy's first skin.

His appearance glows with brilliant green colors and a yellow/green aura. He has a single glowing yellow eye for the left socket and lacks an eye-patch to expose an empty right eye-socket. He sports two hooks on his right hand, and are larger and curvier than the normal Foxy's hook. His body is also very transparent, to the point that his endoskeleton is almost visible. 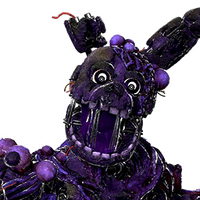 Toxic Springtrap is the second and last wasteland animatronic skin released on June 18, 2020. He is Springtrap's first skin.

Toxic Springtrap is a version of Springtrap with a repulsively mutated appearance, covered in pale tumor-like warts, tentacle-like veins, some moldy skin patches, and exude gassy fumes. His eyes appear like hypnotic black-and-white spirals. Such infectious-looking traits, including his corpse, are shaded with purple and indigo tints, possibly reminiscent to the iconic color of William Afton's appearance as a purple sprite in various minigames.