Not what you were looking for? See Vanny.

Vanessa is a young woman with pale skin, shoulder-length blonde hair, freckles, green eyes, and glossy lips. As revealed in the e-mails in Special Delivery, she used to wear rainbow streak hair extensions[2], and is seen wearing purple nail polish.

While working, she wears a dark gray cap labeled "SECURITY" with a white button-down shirt, two small single-chevron collar pins, simple black shoulder marks and an oval patch featuring a silver police-style badge. This is paired with black oxfords, black slacks and a belt, where she wears a gold-tinted badge on her right hip.

Her former co-worker, Luis, describes Vanessa as someone who could brighten up a room[2] and as beautiful in the scrapped e-mails.

As shown by the e-mails, she has a feminine personality, showing an appreciation for fashion, as she has worn rainbow streak hair extensions. She also likes baking, having ordered cupcake cookbooks, and likes puppies, as she purportedly owns a glittery pink journal with pictures of them. However, Vanessa also appears to be very lonely.

Luis mentioned that she once ordered chocolates for herself and pretended they were from her imaginary boyfriend, Brad. She is shown to take her job seriously, making an effort to find Gregory to keep him out of trouble and even threatens to have Glamrock Freddy scrapped if she finds out he is helping him cause any type of trouble. She also reveals that she knew Gregory's name via hearing Freddy's voice coming from the Fazwatch. She also claimed that all the other animatronics were aware of Gregory's presence, though this could have been done before Vanny sabotaged the animatronics in order to turn them against Gregory and Glamrock Freddy.

She is also shown to be hot-tempered at times, as when she finally finds Gregory and takes him to the Lost and Found, she is seen admonishing Gregory for his actions before her face glitches into Vanny.

Through her therapy session recordings we learn that Vanessa has struggled with severe anxiety, depression, and past trauma. Contrary to her in-game appearance, she seems despondent and has a self-critical attitude during therapy. Her low self-esteem makes her prone to manipulation, as her therapists suggest. Something traumatic happened to her and, as per her admission in the CD logs, she's attempted to compartmentalize it as a coping mechanism.

She was formerly the Senior IT Representative at Fazbear Entertainment, Inc. based on the e-mails in Special Delivery. She later transferred to Freddy Fazbear's Mega Pizzaplex to work as a security guard. However, an electronic message found in game shows that she was considered unqualified for the job, as she had no experience either as a security guard or guarding and patrolling a place as big as the Pizzaplex, with the job interviewer stating in their message that they do not recommend her for the position despite upper management's recommendation. However, she was still hired, and the electronic message regarding her interview was scheduled to be deleted.

Vanessa serves as a complication throughout most of Five Nights at Freddy's: Security Breach, as she searches certain areas for Gregory. During the beginning of the game, it is revealed that she cut Freddy off from the main office. As the player continues to play farther along into the game, Vanessa soon vanishes out of the game. It is likely she gets taken over by Afton and replaced by Vanny during gameplay, who is now hunting Gregory. This continues on until the end of the game. Depending on which ending the player unlocks or secret ending is conducted, Vanessa will either be shown at the end eating ice cream with Freddy and Gregory, or on top of the Rooftop of the burning Pizzaplex looking down on Vanny's dead body.

However, if the player were to unlock the Bad Ending, the Good Ending, or the Burntrap Ending, Vanessa isn't present. This may be because she fled the Pizzaplex.

Vanessa in the leaked poster.

Vanessa's in-game model in the gameplay trailer for Security Breach.

Vanessa walking in the trailer.

Vanessa on the roof of the burning Pizzaplex.

Vanessa at the exit as Gregory approached her with Glamrock Freddy's head.

Vanessa with Gregory and Glamrock Freddy in one of the endings. 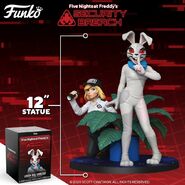 Vanessa glitch teaser from the fourth episode of Freddy & Friends: On Tour!.

Vanessa in the key art of Security Breach. 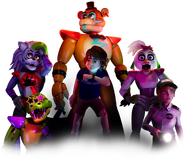