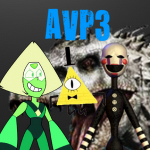 This article is about the animatronic. Were you looking for the gem?

I'm at the FNAF World Wiki too!

I'm a little hazy about it, but I over all believe the dream theory. Deal with it.

Sorry but I don't do role plays.

My favorite animatronic is the Puppet. Foxy and Springtrap are pretty awesome too. Yes, I am a Foxy fan, but a mature one. I DO NOT BELIEVE THE FOXY IS A GOOD GUY THEORY. I believe all the animatronics' settled genders. As for Mangle:

I believe that Scott gave us a character for us to choose what gender we would like them to be. In the actual game canon, I believe Mangle is male (these first two sentences go for Spring Bonnie as well) However, I am much more relaxed about debates now, try to accept femangle believers, and plan to change the gender of Mangle back and forth and/or make them gender fluid when making fan art.

I love FNAF fan art, I even draw some of my own, which I can't post online, or at least not yet. My favorite FNAF artist is Myebi.  I love her work so much and she is a huge inspiration to me. However, she has left the FNAF fandom and moved onto Undertale (which I have heard and seen so much about, and I'd like to eventually get into it too).

I watch YouTube almost every day, and my favorite YouTuber is probably Markiplier. I watch the REACT and TheFineBros channels regularly and love when they do FNAF stuff. Also love MatPat and am getting into watching more GT Live.

I occasionally watch Cupquake, Pewds, and VenturianTale. For my opinions on other YouTubers, just ask.

Sitting Plushtrap.png
1 Plushtrap given to me by PBEgaming :3
Add a photo to this gallery
Retrieved from "https://freddy-fazbears-pizza.fandom.com/wiki/User:AVP3?oldid=2601098"
Community content is available under CC-BY-SA unless otherwise noted.