Five Nights at Freddy's Wiki
Register
Don't have an account?
Sign In
Advertisement
in: FNAF Articles, Platforms, Mobile,
and 2 more

Were you looking for the PC version of the same name? 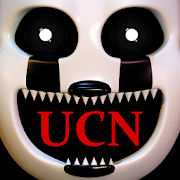 The mobile port of Ultimate Custom Night was released on April 28, 2020 by Clickteam LLC for the iOS and Android ports.

The game is available on App Store and Google Play Store for $2.99.

NOTE: A device with at least 2 GB of RAM is required for this game to run properly.

Welcome to the ultimate FNaF mashup, where you will once again be trapped alone in an office fending off killer animatronics! Featuring 50 selectable animatronic characters spanning seven Five Nights at Freddy's games, the options for customization are nearly endless. Mix and match any assortment of characters that you like, set their difficulty from 0-20, then jump right into the action! From your office desk, you will need to manage two side doors, two vents, as well as two air hoses, all of which lead directly into your office.

This time you will have to master other tools as well if you want to complete the ultimate challenges, tools such as the heater, A/C, a global music box, a power generator, and more. As if all of that weren't enough, you'll also need to set up laser traps in the vents, collect Faz-Coins, purchase items from the Prize Counter, and as always, keep a close eye on not one, but two, Pirate Cove curtains!

A screenshot showcasing Nightmarionne, Rockstar Freddy, and Candy Cadet in the Office.

A screenshot showcasing the Prize Corner with the plushies; some purchasable, some not.

A screenshot showcasing all fifty characters set at twenty AI.

A screenshot showcasing the player with the Freddy mask on, while encountering Toy Chica.

A screenshot showcasing the vent system, along with icons belonging to Withered Chica, Mangle, Springtrap, Ennard, and Molten Freddy.

A screenshot showcasing the room where Toy Freddy first starts.

ULTIMATE CUSTOM NIGHT Mobile trailer Official
The first trailer before it was removed, this video is just a reupload of it.

Ultimate Custom Night - Mobile Edition
The second trailer with Nightmarionne being renewed to his original model.
Community content is available under CC-BY-SA unless otherwise noted.
Advertisement