Not what you were looking for? See Custom Night (disambiguation).

Ultimate Custom Night is a standalone game, as requested by the community and described by Scott as an “Ultimate Custom Night”, featuring fifty-eight characters in total, making this the biggest variation of the mode in any game yet. It was released on June 27, 2018, on Steam, with a mobile port releasing for iOS and Android on April 28, 2020, and a Nintendo Switch version in the works as of 2020.[1]

As a first in the series, Ultimate Custom Night seems to include a variety of animatronics from all preceding games, from the first to sixth installment, while other characters are introduced (Dee Dee and Old Man Consequences from FNaF World). All characters are known to have customizable AI, except for characters summoned by Dee Dee (RWQFSFASXC, Plushtrap, Nightmare Chica, Bonnet, Lolbit, Minireena) and Fredbear.

Scott Cawthon had offered some information about the characters' behavior as he slowly added each member of the roster into the game. He had completed all of the characters and had released a demo of the game for a few YouTubers to play, along with voice acting auditions for nearly every character present on the roster. He had also announced that Custom Night will be released as a standalone game instead of an update for Freddy Fazbear's Pizzeria Simulator for the sake of launching and playing more easily. It is also confirmed by Scott on a recent Steam Post that this would currently be his last Five Nights at Freddy's game.

Welcome to the ultimate FNAF mashup, where you will once again be trapped alone in an office fending off killer animatronics! Featuring 50 selectable animatronic characters spanning seven Five Nights at Freddy's games, the options for customization are nearly endless. Mix and match any assortment of characters that you like, set their difficulty from 0-20, then jump right into the action! From your office desk, you will need to manage two side doors, two vents, as well as two air hoses, all of which lead directly into your office.

This time you will have to master other tools as well if you want to complete the ultimate challenges, tools such as the heater, A/C, a global music box, a power generator, and more. As if all of that weren't enough, you'll also need to set up laser traps in the vents, collect Faz-Coins, purchase items from the prize counter, and as always, keep a close eye on not one, but two, Pirate Cove curtains!

While Metacritic's critic review score is not posted just yet, the overall reception is generally well-received, currently holding a positive 8.3 user score.[2]

As the game is set up in a more arcade-like style, progress is tracked through a High Score system. Every character can be set to a difficulty from 0 to 20. For each point of difficulty per character, the possible score goes up by 10 points, giving a maximum starting score of 10,000 points. Score can fluctuate while playing the night should Dee Dee summon or buff a character, increasing the score accordingly.

The ultimate challenge of Ultimate Custom Night is considered to be 50/20 mode where all 50 animatronics are set to level 20. This is further complicated by XOR always making an appearance this night, bringing the true challenge to 56 characters by 2 AM. As game creator Scott Cawthon considers this mode impossible, a Best Time value is shown on the Character Select Screen.

The night starts out with the player in their office. They have two doors on the left and right side, a vent on the wall infront of them, a vent next to the right door, a Monitor, and a Freddy Fazbear Head returning from Five Nights at Freddy's 2. On the monitor, the pizzeria the player is in has a similar layout to the Freddy Fazbear's Pizza from the first game. Like most Five Nights at Freddy's games, the player's primary goal is to survive until 6 am. The entire night is 4 minutes and 30 seconds with each hour lasting 45 seconds.

On the bottom left, there is a power gauge and a new noise meter for the player to be aware of for noise sensitive animatronics. On the bottom right, there is a heat meter for them to be aware of heat-sensitive animatronics. The temperature starts at 60 degrees and goes up to 120 degrees. Unlike in the previous game, keeping the temperature value hot will not make you pass out.

Warning signs by the monitor button that will indicate that the player must reset the ventilation by pressing the Reset Ventilation button on the bottom right of the monitor screen. The screen will continuously fade to black until the button is pressed. However, the ventilation can be reset even with a completely black screen.

In the kitchen, it is audio only, like the first game. It has the music box that contains The Puppet (if he is selected for the night) and it also has a change music button for Chica. Scattered throughout the resturaunt on the monitor, there are Faz-Coins. These are for the prize corner where the player can buy either a Bonnie doll (used to keep away Nightmare Bonnie), a Funtime Foxy doll (used to keep away Nightmare Mangle), a Circus Baby doll (used to keep away Baby), and a Death Coin, which can be used to remove a specific animatronic for the rest of the night like Toy Freddy and The Puppet. However, it can only be bought once, so the player needs to choose wisely on who they don't want. The Death Coin costs 10 Faz-coins whereas the plushies start at a cost of 10 Faz-coins and increase according to the difficulty of the corresponding animatronic.

On the number keys on the player's keyboard 1-6 or on the monitor next to the cam options, they are able to choose what effect they want throughout the night. The first is the power generator which helps the player conserve power, a silent ventilation button, a heater used to increase the temperature in the office and to keep certain animatronics back, a power A.C. to decrease the office temperature to keep away heat-sensitive animatronics like Jack-O-Chica and Lefty, and a global music box that automatically winds up the music box and can keep animatronics like Lefty at bay, but this drains the player's power fast.

There is a rare chance that Dee Dee will show up and summon either an animatronic that is not selected or not in the selection menu at all. Those who are not in the menu will only attack once. There is no other way to prevent Dee Dee from showing up other than using a DD Repel. If it is on 50/20 mode, Dee Dee will change into X.O.R, a darker and creepier version of Dee Dee and will summon multiple characters. Unlike Dee Dee, X.O.R cannot be stopped by a DD Repel, and will summon characters regardless of whether a DD Repel is active or not.

If the player passes through a night, whether or not they complete it, there is a chance that they will receive a power-up as a reward. The items the player is able to recieve are Frigid that starts the Office at 50 degrees instead of 60, 3 Coins where the player starts the night with three Faz-Coins, Battery which starts their night with 102% power instead of 100%, and DD Repel which prevents Dee Dee, but not XOR, from showing up.

Every difficulty point per customizable animatronic is worth 10 points. Therefore, one animatronic set to 20 difficulty will contribute a score of 200 points. With over 50 animatronics, this gives a maximum starting score of 10,000 points. That said, the threats summoned by Dee Dee will also contribute an extra 100 points, giving a maximum score of 10,600. Certain thresholds garner a rating that increases every 2000 points, as follows:

Completing certain milestones will unlock intermission cutscenes. No matter how high their score is, however, the player will always start with the first part of the cutscene.

There are two different intermissions that involve into thirteen cutscenes overall, "The Bear and The Fox", and "Toy Chica: The High School Years".

A fourteenth and final cutscene is unlocked when the player has watched all previous cutscenes and has a 9800 score. This cutscene plays an animation of Golden Freddy (in his Yellow Bear incarnation) twitching in a void.

This is a playlist by DJ Sterf including strategies for all challenges and 50/20 mode.

The following is a spreadsheet from DJ Sterf showing a 50/20 strategy that while is hard to explain, is better explained in visuals.

A set of fifty-one characters from across the entire franchise have been included in Ultimate Custom Night as threats to the player.

The most recent Ultimate Custom Night roster, via scottgames.com.

Without any Characters (Note: There's only 40 slots)

Ultimate Custom Night "progress bar", via scottgames.com, which is updated by 2% with each character fully programmed, according to Scott.

DeeDee as she's introduced for another teaser.

Fredbear being featured before the website went blank minutes after.
Add a photo to this gallery 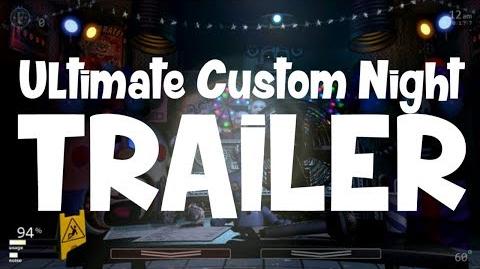