Twisted Wolf, also known as The Wolf, is one of the four twisted animatronics and an antagonist of the novel Five Nights at Freddy's: The Twisted Ones. It was created by William Afton to hunt down and kill Charlotte Emily.

Twisted Wolf appears to be a cross between a bipedal wolf and an animatronic. He is tall, with gray fur, sharp teeth, and an elongated snout. He has large, silky ears, and shining blue eyes. His body seems to be cybernetic, with one side of his body seemingly composed of flesh and the other side mechanical.

The right side of his body more closely resembles a wolf, being very furry and a mane that ran over the top of its head and down its back, and the right hand and right foot being smaller. The left side however, is more robotic, with a visible endoskeleton, rubbery translucent skin, a wider left eye socket, and spikes protruding from his left arm.

The wolf is first seen by Charlie in Chapter 8. Clay Burke was in his police car, along with Charlie, John, and Jessica, who were all sleeping. Clay was watching from a far distance the mounds that was made by the twisted animatronics that the teenagers discovered in a backyard, that was damaged by a hurricane. Even though there were multiple mounds, one of them were housed by Twisted Freddy.

Tired of waiting, he grabs a flashlight and exited the car cautiously, to check on the mounds. Charlie was startled and roused from her sleep. She wakes up John and Jessica as she quickly leaves and runs to check on the mounds as well. To her surprise, the mounds were gone. As Clay runs back to the car, Charlie tries to catch up but hears a high-pitched scream. Charlie then realized that she was alone in the woods, then sees the wolf. The wolf stared at her for a moment, then spasmed alarmingly with his chest splitting open. A women fell from inside him, landing on the ground. The wolf then turns and heads into the woods until it disappears into the dark. Clay approaches from behind Charlie and tries to assist the woman, who was still alive, while John and the others get help.

In Chapter 13, after Twisted Freddy got shot several times by Clay, the wolf appeared in a corridor along with Twisted Bonnie. As the twisted animatronics were slowly approaching the group, getting ready to attack, they were stopped by Springtrap.

Later, as Charlie, John, Jessica, and Clay were getting chased by the wolf and Twisted Bonnie in the underground pizzeria, they reached the room with a waterfall and headed directly for a passage beneath the cliff, where the water emerged. Then when they saw the two twisted animatronics, they stared at them so that they can cross through the river, destroying them, but they survived. Clay had the idea to light the water with gasoline, since there were gas cans nearby, but it didn't work either. Even though the wolf and Twisted Bonnie survived, they were heavily damaged.

After Charlie left to find Springtrap, Clay, Jessica, and John were cornered. The wolf attempted to attack them, but was subsequently destroyed by Foxy.

Twisted Wolf seen in one of the two teasers before the book's release.

A concept art of Twisted Wolf by LadyFiszi. 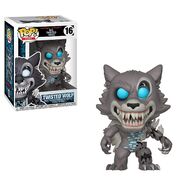 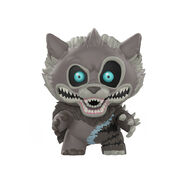