Not What you were looking for? See Freddy (disambiguation).

Twisted Freddy is one of the twisted animatronics and an antagonist in Five Nights at Freddy's: The Twisted Ones. He is the twisted incarnation of Freddy Fazbear, which was created by William Afton to hunt down and kill Charlotte Emily.

Twisted Freddy is a large brown bear animatronic with numerous sets of teeth. Like the original Freddy Fazbear, he has a black top hat and bowtie and blue eyes, but the similarities end there. He has a gaping opening in his belly, with numerous sets of teeth inside, similar to the teeth on the stomachs of Nightmare Fredbear and Nightmare. He also has numerous boils on the right side of his head, along with his ears and left eye socket. With his device not active, he is described as being blank white and featureless, only recognizable as Freddy by the ears and hat.

The interior is quite cavernous, large enough to hold an adult inside. The captive's limbs are inside of the animatronic's. Springlocks restrain them and attempting to move could set them off, but this can be avoided if the occupant is careful and know what they are doing. The twisted animatronics kill by setting off the springlocks.

Twisted Freddy also possesses the ability to roll his eyes fully back and look at his captive.

Twisted Freddy is first found buried in the backyard of a woman's house alongside Twisted Wolf, where his head is uncovered by Clay Burke. He later kidnaps Charlotte Emily inside of the tornado-stricken house of the deceased Henry Emily, and brings her to the Underground Pizzeria, where she digs herself out of his chest cavity. He is later attacked by Foxy, tearing off a chunk of his face and his arm.

Later, it is revealed that Twisted Freddy, in fact, did not die, and forcibly stuffs Charlie into his chest, where she dies of springlock failure.

The first teaser with Twisted Freddy.

The artwork details of Twisted Freddy and Twisted Bonnie 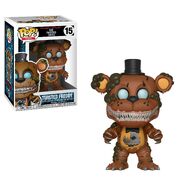 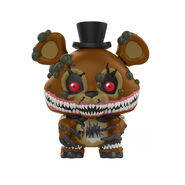 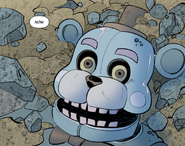 Twisted Freddy lay as a bait.
Community content is available under CC-BY-SA unless otherwise noted.
Advertisement