Twisted Chica is a monstrous version of Chica with an organic look. She is only mentioned in Five Nights at Freddy's: The Twisted Ones.

Seen in LadyFiszi's official artwork, Twisted Chica's grotesque appearance is faintly similar to Nightmare Chica, but with half of every part closely looking organic, mostly colored in yellow sporting small growth-like warts. She has a large, fang-filled orange beak, also sporting toothed maws around the upper part of her body; including the joints of her arms and on the stomach. The upper arms are the same orange as her legs, with fingers sporting razor-sharp talons. Her head has puffier cheeks, pupilless magenta eyes with eyelashes, pink eye-socket areas, and three large sack-like growths from the top of her head acting like her feather tufts. Similar to Nightmare Chica, Twisted Chica wears a torn bib with "LET'S EAT!!!" text.

More sickening parts for her appearance includes a mutated, organic-looking pink cupcake with gnarly teeth merging from the left side of Twisted Chica's head, along with another menacing-looking cupcake attached to the lower right side of her hip which is yellowish-golden in color. Both cupcakes possess lit candlesticks.

Nothing is known about Twisted Chica's personality. However, as with the other twisted animatronics, Twisted Chica's behavior would have possibly been animalistic and ferocious.

Although Twisted Chica never physically appeared in the whole story of The Twisted Ones. However, the possibility that she may exist was brought up by Charlotte Emily upon finding their hiding place:

"Did the other two mounds hide similar creatures? Was there a malformed rabbit hidden in the dirt just there? A chicken clutching a cupcake to its grotesque chest?" 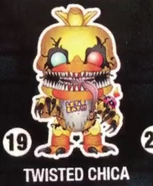 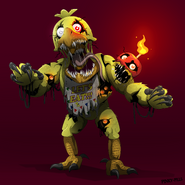 The art that prototype Twisted Chica was based on. 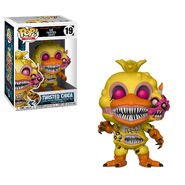 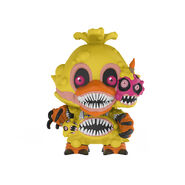