Twisted Bonnie is one of the antagonists in Five Nights at Freddy's: The Twisted Ones. He is the twisted incarnation of Bonnie, which was created by William Afton to hunt down and kill Charlotte Emily.

Twisted Bonnie is a large blue-purple animatronic rabbit, with an organic look thanks to William Afton's illusion discs. He sports articulated ears that are split into three segments each. He has rips all around his suit, including a hole where the right side of his torso would normally be, revealing the endoskeleton underneath. He also sports boils on his arms and legs, spikes protruding from his upper arms, wiry whiskers similar to Nightmare Bonnie, and an additional bottom jaw that is separated into two protrusions sticking out of the bottom of his head. On his hands are hook-like black claws. 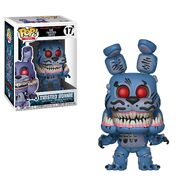 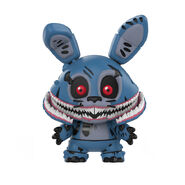