Trash and the Gang are a series of poorly-made "animatronics" built from mundane everyday objects.

Bucket Bob has multiple wooden broomsticks connected with tight ropes, he has a bucket head with a drawn face on it and has hands which are two blue-turquoise checkered oven mittens.

Mr. Can-Do has a silver-colored trash bin for a body, with a pinkish-red balloon with a smiley face drawn on it for his head. He has also two wooden bars which acted as hands or supporters.

Mr. Hugs is a teal-shaded vacuum cleaner which has two silver poles, which is connected to the handle with two white plastic arms, two plastic googly eyes with a brown bag connected at the vacuum cleaner.

No. 1 Crate is simply a blue cube crate with two plastic googly eyes and two foam hands with a "#1" text attached with wooden sticks, which attaches into the crate.

Pan Stan is an assembly of what appears to be wooden broomsticks and a frying pan with a face drawn on it, all held and supported together with an assortment of tight ropes and two large nails.

The "Trash and the Gang" animatronics are available for purchase from the start, found in the "Dumpster Diver Weekly" section of the Catalog. All of them are classified as "light" animatronics, and in the "very good" item condition, all of them are priced at $10 (except Mr. Hugs, who costs $15). Their stats are as follows:

To unlock the "Trash and the Gang" achievement, the player must purchase all five of these "animatronics", and have them on the stages at the same time.

Four of the 'Trash and the Gang' animatronics return in Ultimate Custom Night as one of the many selectable characters.

No. 1 Crate, Bucket Bob, and Mr. Can-Do will only appear in the main gameplay of "Trash and the Gang" while Mr. Hugs appears in his own game "Five Nights with Mr. Hugs" that Toy Freddy plays. Despite the other four trash animatronics that are in the game, Pan Stan is completely absent.

No. 1 Crate will sometimes appear at the bottom of the screen in the office, whispering to the player that it has a secret to tell. After a short time, No. 1 Crate will "jumpscare" the player, which will pull them out of the Monitor, and disappear.

Bucket Bob will randomly jumpscare the player, often doing it after the jumpscare of No. 1 Crate.

Mr. Can-Do appears on some of the cameras, blocking ~80% of the player's view.

Mr. Hugs is not part of the gang, instead he can be seen on the right hallway (CAM 02) as a background element. Mr. Hugs is also the main antagonist of "Five Night With Mr. Hugs", the video game played by Toy Freddy.

The gang is mostly depicted as having joke mechanics due to their random and comedic behaviors, however they can become dangerous if they distract the player in a bad situation. Their loud jumpscare sound can distract the player, and Mr. Can-Do can block Toy Freddy's game, Funtime Foxy's sign, or the currently active plush animatronic at CAM 02.

The challenges in which Trash and the Gang appear are as follows:

Bucket Bob's icon in the Catalog.

Mr. Can-Do's icon in the Catalog.

Mr. Hug's icon in the Catalog.

No. 1 Crate's icon in the Catalog.

Pan Stan's icon in the Catalog.
Add a photo to this gallery 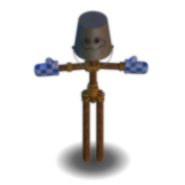 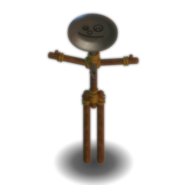 Pan Stan on the stage. 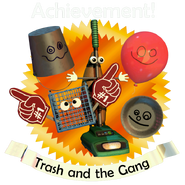 the Trash and the Gang achievement.
Add a photo to this gallery

A frame of No. 1 Crate's jumpscare.

A frame of Bucket Bob's jumpscare.

Mr. Can-Do as he appears when blocking the player's camera.

The icon of the enter Trash and the Gang, used in the final game.
Add a photo to this gallery

Retrieved from "https://freddy-fazbears-pizza.fandom.com/wiki/Trash_and_the_Gang?oldid=3326689"
Community content is available under CC-BY-SA unless otherwise noted.