Theodore is an animatronic rabbit and was the first toy built by Henry for his daughter, Charlotte Emily.

The Freddy Files Description: This purple rabbit was the first of Charlie's father's gifts and the simplest of his creations. It could wave its hand, tilt its head, and repeat a recording of Henry saying, "I love you, Charlie." Theodore was made to give three-year-old Charlie a friend in her dark, lonely house. After deteriorating for years in Charlie's abandoned house, Theodore can no longer wave, and most of her father's recording has degraded.

In The Silver Eyes, Theodore has thin plush fur, shining eyes, and a red bow-tie. He was the size of a three-year-old child and has a hanging ear. The front of the toy was gray and faded due to sunlight but his back was dark purple, like the color he originally was.

In The Twisted Ones, he gets used for parts for Charlie's project. All of his body parts were severely damaged from a storm that occurred before the events of the book.

He has blue eyes, red cheeks, and a light pink color on the palms of his hands, as well as the undersides of his feet. He sports a pair of teeth on both his upper and lower jaw, which later becomes chipped due to years of deterioration.

Theodore was the first toy that Henry invented for his daughter Charlie. After Henry committed suicide, Charlie left Hurricane with her Aunt Jen, while all her toys, including Theodore, were left at her father's house.

After ten years, Charlie returns to Hurricane to commemorate the anniversary of the death of Michael Brooks. She first visits her old home, where she finds Theodore, who had worn away over the years, along with her other toys. After that, Charlie left the house, as she did not feel comfortable being there.

Later, Theodore reappears when Charlie and John return to the house, but he is never removed from there.

A year after later, Charlie enrolled in St. George's School, specifically in the area of ​​robotics. Just before classes begin, Charlie went to her father's house (which was damaged and battered by a heavy storm) and picked up Theodore, who was in a more deplorable state and could barely speak a few letters.

When Charlie took him to her room, she dismantled him so she could study his parts, promising to repair him again. However time passed, and the dismembered parts of the rabbit were already scattered throughout the room.

Later, Charlie deduced that the Twisted Animatronics are hunting down her specifically, and the murders they commit won't stop until they find her. She then decided to go alone to the next point where the robots were going to attack, so she grabbed Theodore's decapitated head to serve as company.

It's shown that John kept Theodore's head for company and a reminder, and talks to it, talking to Theodore of what he's dealing with lately. When John mentioned how Theodore is in worse shape than he is, Theodore kept responding with a glitchy "Shining Star, Silver Reef" much to John's surprise.

John tells Jessica about Theodore's message. They then realize that Silver Reef is an old ghost town. John and Jessica then decide to drive there, to see what Theodore meant. 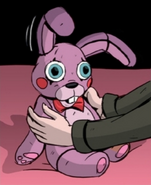 Charlie placing Theodore back in her bed. 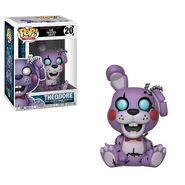 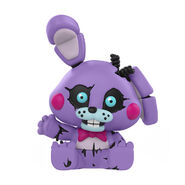 Theodore as a mystery mini. 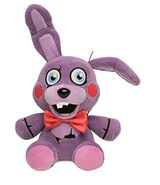 Theodore as a plushie.
Community content is available under CC-BY-SA unless otherwise noted.
Advertisement