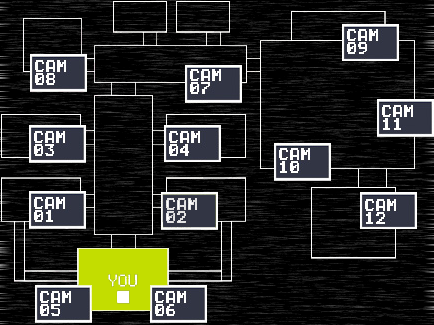 Unlike The Office from the first game, there are no doors to protect the player; in place of the doors there are two vents on either side of the room, along with a large hallway in front of the player. The player will now have to rely on the vent lights, the Flashlight, and the Freddy Fazbear Head in order to avoid a swift death at the hands of the animatronics.

The Office has a large, dark entrance in front of the player, with vents on both the left and right walls. In front of the player is a desk with balls of paper, a fan, and a drink. There are two warning symbols on the wall above the entrance. On the left wall there is a poster that reads "CELEBRATE" and features the toy animatronics, excluding Mangle.

The right wall features children's drawings of the animatronics. Each drawing seems to have the words "My day at the NEW Freddy Fazbear's Pizza!" The drawings depict what seems to be empty suits, sometimes with eyes, but rarely. Two drawings depict satisfied or happy children disassembling Mangle. The top-right drawing features Freddy Fazbear as an empty suit with what appears to be a red nose, singing to a child that is dancing happily to the music. The one beneath it seems to depict Golden Freddy's suit lacking a nose and emitting curved lines, which could possibly signify odor, towards one child that is turned towards Golden Freddy. The other three children in the drawing, however, seem to be looking at something emitting music, but not visible in the drawing.

Another drawing depicts a child floating away or possibly jumping with balloons, BB being at the right of the drawing, looking over at the child. Curiously, Balloon Boy in-game is never seen with his eyes ever facing another direction besides forwards. Another picture depicts The Puppet giving a child a gift, possibly referencing the Death Minigame dubbed "Give Gifts, Give Life," or otherwise implying that The Puppet is designed to hand out prizes to kids.

Another drawing appears to show a child with a cartoon heart over its head reaching its hand out to what appears to be Chica, whose eyes are actually visible, unlike the rest of the depicted animatronics (Balloon Boy and The Mangle being exceptions). Another drawing features what can be assumed to be the old animatronics: Bonnie, Freddy and Chica. However, the Chica in the drawing's beak resembles Toy Chica's beak. A ninth drawing is present but is off-screen, only showing a child with confetti raining down upon them. The ninth picture can be seen fully in Kid's Cove and the Prize Corner. It depicts The Puppet springing out of its box and throwing confetti on amused children.

There appears to be colored stars hanging from the ceiling and black and white tiles used for flooring, both of which are common designs throughout the building in both the original game and Five Nights at Freddy's 2. The blue and green-tiled strip of wallpaper is also a common feature throughout the pizzeria. There are papers stuck to the walls, but their contents are unknown.

Monitors are positioned against the far wall with thick wires connected to them, seeming to lead from cameras throughout the building; there are also wires leading to nowhere on either side of the room. The walls appear to be made of either gray concrete or moldy/fading wallpaper with confetti as decoration. The black marks on either side of room are perfectly mirrored, though this may just be Scott Cawthon not taking the time to render two separate textures for two separate walls, which commonly occurs in video games.

Unlike the original, this office is much cleaner and more organized, probably due to either the company having a larger budget or better management. This could also just mean that Jeremy Fitzgerald is much more organized than Mike Schmidt. The monitors are now located to the sides of The Office, rather than in front of the player.

The Office from the second game appeared in the FNAF 2 game mode as its central location.

The Flashlight can be shone down the hall.

When an animatronic is moving down the hall, the Flashlight stops working momentarily.

Air Vents with both lights on.

Freddy Fazbear in the hall.

Freddy inside the Office.

Toy Freddy looking into the Office from down the hall.

Toy Freddy about to enter the Office.

Toy Freddy inside the Office.

Bonnie looking into the Office from the hall.

Bonnie inside the Office.

Toy Bonnie popping his head out of the Right Air Vent.

Chica inside The Office.

Toy Chica in the hall.

Toy Chica looking inside from the Left Air Vent.

Foxy getting ready to charge at the player from the hall.

Foxy about to charge at the player from the hall, while Bonnie watches.

Foxy about to charge at the player from the hall, while Mangle watches.

Mangle looking inside from the hall.

Mangle looking inside from the Right Air Vent.

Mangle hanging from the ceiling of The Office.

BB looking inside from the Left Air Vent.

BB inside the Office, disabling the Vent Lights and Flashlight.

Golden Freddy sitting inside the Office.

Shadow Bonnie inside the Office.

The paperpal doll appearing in the Office.

The player wearing the Freddy Fazbear Head with Bonnie in The Office.

Bonnie in The Office, and putting on the Freddy Head, as seen from the trailer.

Toy Bonnie in the Office sliding into view on the Freddy Head.

JJ underneath the desk.

All prizes collected.
Add a photo to this gallery 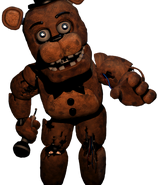 Withered Freddy as he appears in the Office.

Withered Bonnie as he appears in the Office.

Withered Chica as she appears in the Office. 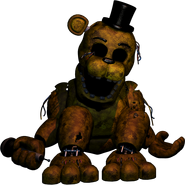 Golden Freddy as he appears in the Office.

Toy Freddy as he appears in the Office.

Toy Bonnie as he appears sliding across the Office.

Mangle as it appears hanging on the top of the Office. 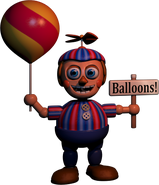 Balloon Boy as he appears in the Office.

The BB paper doll as it appears in the Office.

Shadow Bonnie as it appears in the Office.

JJ under the office desk.

The Chica and cupcake plush obtained from beating Ladies night.

The Balloon Boy figurine the player gets from beating Night of misfits.

The Toy Bonnie figurine obtained from completing New and Shiny.

A Jack O'lantern for the Office desk during the Halloween day.
Add a photo to this gallery

The Office with Foxy approaching in the fourth teaser for the game.

The Office on mobile.

JJ under the desk on mobile.
Add a photo to this gallery

Retrieved from "https://freddy-fazbears-pizza.fandom.com/wiki/The_Office/FNaF2?oldid=3228072"
Community content is available under CC-BY-SA unless otherwise noted.