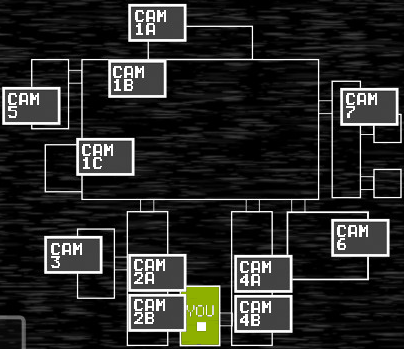 The Office is a location in Freddy Fazbear's Pizza and the central location in Five Nights at Freddy's. With the exception of the fourth, fifth and sixth games, the Office is the only room that the player inhabits.

The Office is a small, compact room. Against the wall in front of the player stands a desk, on top of which sits a few electronic monitoring devices, as well as a fan, a drink, an overhead lamp, and various balled up papers. Wires stream up to the ceiling from the monitoring devices. The desk has two drawers, along with a speaker with a spider web that seems to be covering the speaker itself.

On top of one of the monitors sits a pink cupcake with large, cartoony eyes that resemble those of the animatronic characters. The wall behind the desk is adorned with a poster of Freddy Fazbear, Bonnie, and Chica on stage, on top of which reads "CELEBRATE!" in large letters.

Next to the poster are drawings which seem to have been drawn by children, hanging up on the wall. The leftmost picture features Bonnie popping out of a white and red box. The drawing diagonal to it shows a child getting a present from Freddy, along with a cluster of smiley faces. The picture directly below that is one of a sun next to a group of balloons. The picture diagonal to that shows Freddy handing a girl a present.

There are two other drawings, mostly obscured: the one on the left is a bust of Bonnie's smiling face, and the one on the right illustrates two children around a birthday cake, with what appears to be Freddy and Bonnie's heads on top. Each drawing has large, colored text on top that appears to read: "MY FUN DAY!!!" with the "N" of "FUN" obscured in each instance. In each picture showing the animatronic characters, their eyes are drawn as black with white pupils, just like the uncovered endoskeleton eyes. More pictures just like these can be seen in the West Hall (CAM 2A).

On either side of the player are large windows, which allows them to see outside of The Office, as well as two doors that stay open, and can only be closed by pushing the corresponding button. Outside of the doors are hallways which lead to the rest of the restaurant and contain some electrical items, as well as small papers littering the walls.

Nearest to the player are two different colored panels, one on each side, both of which have two buttons mounted on them. The top button closes and opens the Doors, which protect the player from the intruding animatronics, and the lower buttons power on the corresponding lights to allow the player to see directly outside The Office. The longer the lights and doors are active, the more power is drained.

The floor appears to be black and white tiled, matched by a black and white tile stripe on both walls. The rest of the walls from the checkered stripe up are a grayish color. The ceiling itself is not visible, and the only thing on it seems to be a hanging ceiling lamp, which illuminates the room.

In the mobile version of the game, the player can purchase decorative plushies (stuffed toys) of Freddy, Bonnie, and Chica for The Office. The Bonnie plush sits on the left side of the desk, the Freddy plush on top of the monitor in front of the poster, and the Chica plush to the right of the fan, each costing approximately $0.99.

The Office appeared in the third game's end-of-night minigames as one of the explorable locations.

The Office from the first game appeared as the FNAF 1 game mode's main location.

The left light turned on.

The right light turned on.

Bonnie and Chica teaming up.

Freddy attacking the player with power remaining. Note his reflection on the TV monitors.

Foxy popping into the Office just before he attacks the player. Notice his reflection on the TV monitors.

Golden Freddy in the Office.

The Office when the power runs out, without Freddy in the doorway.

The Office when the power runs out, with Freddy in the doorway.

The Office after the backup power has gone out (notice the barely-visible shine on the door frames).

Freddy attacking after the power goes out.

The Office, updated with the new Halloween themed objects.

The Office with plushies of Freddy, Bonnie and Chica (mobile version only).
Add a photo to this gallery

The Office, brightened and saturated for clarity.

Golden Freddy in the Office, brightened.

Freddy at the door after a power outage, brightened and saturated for clarity.
Add a photo to this gallery

Texture of the right Door.

Texture of the buttons on the left-hand side of the Office.

Texture of the buttons on the right-hand side of the office.

The fan in The Office, animated.

The pumpkin seen on the Office desk during Halloween.
Add a photo to this gallery 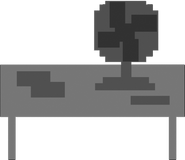 The Office desk's sprite from the end-of-night minigames.
Add a photo to this gallery

Retrieved from "https://freddy-fazbears-pizza.fandom.com/wiki/The_Office/FNaF1?oldid=3228508"
Community content is available under CC-BY-SA unless otherwise noted.