The Fright Dome is a walk-through horror attraction located in Circus Circus of Las Vegas, Nevada, first announced on September 7, 2016.[1]

Featured in the Adventuredome, the attraction was opened on September 30, 2016 and ran throughout the month of October. Scott recently revealed that it will not be open in 2017, due to management changes.[2]

Fright Dome owner Jason Egan has teamed up with the creator of one of the most popular horror game franchises, Five Nights at Freddy's, to bring it to life this year! The infamous Freddy Fazbear's Pizza is closed for the night so guests can tour the unsuspecting eatery – but BEWARE characters like Freddy, Bonnie, Chica, & Foxy have a tendency to wander the hallways and stalk visitors. Hopefully you’ll make it out before the morning...

At the entrance, a relatively run down scene can be seen: moss staining on walls, vines creeping down from the ceiling, and grunge-stained brick walls. In the first room, this "location / pizzeria" is a vague representation of Freddy Fazbear's Pizza from the first Five Nights at Freddy's game: A seemingly deactivated Freddy is standing on the stage between with two signs; "Freddy Fazbear's Pizza" and "Grand Reopening"). Under the "Freddy Fazbear's Pizza" sign, there is a door, in the front, and to the left. There is also a curtain left of the main door in the middle.

Through the curtain is a Office that vaguely resembles the original first game's office. Though it has the monitors and the drawings that the first game's Office has, there are some noticeable differences: This Office has the Freddy mask next to a door frame that leads to another hallway, if turning right at the intersection, there is a camera system, which does not function. Turning left, there is another curtain.

Behind this curtain is the room mixed with the Show Stage and the Dining Area location, consisting of Freddy, Bonnie, and Chica on the stage. They all seem to be deactivated, except for Chica. She is standing up right unlike the other two. To the left, there is a "HAPPY BIRTHDAY" banner hanged up, and to the right there is a banner that says "LET'S PLAY", and under that there is a door. To the left of the door, there is another curtain.

After the hallway and passing through the another curtain, there is a Prize Corner room. This Prize Corner has all of the first game's animatronic gang plushies, both small and big. Below, there are smaller merchandise products, like key hangers, T-shirts, hats, and even a cupcake plushie.

Yet after another hallway, there is an empty Pirate Cove but leads to another hallway. After the corridor maze, there is a lit room, which is red. And when going down the hall, there are windows on the left side. Moving forward, there is an office which bears more accurate resemblance to the one in the first game. Then, a black room with a huge "6AM" sign, and at the end after the curtain is the exit.

The calendar for how many days of the Fright Dome. 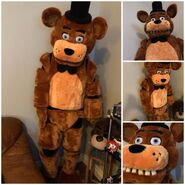 Freddy Fazbear from the Fright Dome, after the attraction's closure.

Fright Dome 2016 - Five Night's at Freddys
The video announcement for the attraction's opening.

Retrieved from "https://freddy-fazbears-pizza.fandom.com/wiki/The_Fright_Dome?oldid=3249558"
Community content is available under CC-BY-SA unless otherwise noted.