The Freddy Fazbear Virtual Experience is a virtual reality game released by Fazbear Entertainment and developed by Silver Parasol Games to make light of the rumors spread about the animatronics. It is the in-universe name for Five Nights at Freddy's VR: Help Wanted.

The game, in canon, was released in order to hide the bad press concerning the defacing stories spread by some "complete lunatic" that seems to be the unnamed in-game counterpart of Scott Cawthon.[1] These stories have, according to HandUnit, been reformatted to be funny and distributed for entertainment.

Pressing this will take the player back into the Intro Sequence ride which should have played when they first started the game. This is useful for collecting the tape hidden there. The sequence itself features an introductory welcome speech by HandUnit. After giving a basic summary about the Virtual Experience itself, the player is then presented with a liability waiver which the player must agree to in order to continue. The waiver itself, provided the player is patient enough to let it scroll to the end, reads as follows:

After being unlocked, the Tape Room can only be accessed from the Blacklight Menu by interacting with the glitchy cassette player on top of the Faz-Token counter.

As of yet, the means of activating the Showtime button through normal gameplay has yet to be discovered. The feature has never been properly available since the release of the game and, as of now, seems unlikely to ever be officially implemented. However, through manipulating the files in the PC version, the results of pressing the Showtime button can be viewed, which is a stage performance featuring the four classic animatronics with alternate colors available in Blacklight Mode.

The Prize Counter is a location where the player can summon unlockable prize items.

Characters that were in the game when it was first released are on the right include:

Characters that were added in the game in later updates featured on the left include:

The Prize Room can only be entered upon successful completion of a level. The room is adorned with purple, starry curtains and silver stars dangling from the ceiling with a banner above reading "GAME WON! CLAIM YOUR PRIZE". In the middle of the room sits a purple table with a giftbox. Once here, the player cannot leave until they turn the crank on the giftbox and release the present inside. On rare occasion, Plushtrap will jumpscare the player from the giftbox instead of receiving a prize. This will always occur after Night 1 on FNAF 3.

The player will be sent to this room when failing the level, giving the player an opportunity to restart the level or head back to the main menu.

Nightmare Fredbear in the Intro. 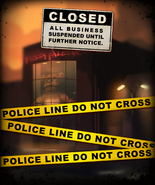 Freddy Fazbear in the closed location.

The image of the developer, portrayed by Scott Cawthon. 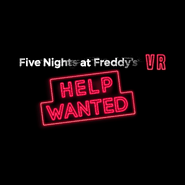 The title card for the game. 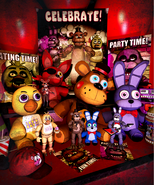 A group of plushies and other in game merchandise.