The Blob is an amalgamation of various animatronics that appears in Five Nights at Freddy's: Security Breach as a secret antagonist.

As its name suggests, The Blob is a huge mass of wire tentacles and animatronic parts, possessing many glowing red eyes. The Blob's main head has a mask identical to that of Funtime Freddy but with black eyes and pinkish red glowing pupils, and its endo face reveals to have metal plates rather than coils of galvanized wire. Their body is a large blackish mass made of tentacle-like wires. It appears to be a much larger version of Molten Freddy after the Pizzeria Simulator fire, but is far more grotesque and mixed with parts of more animatronics and endoskeletons. If one looks closely, they can see parts of other old animatronics, such as pieces of Circus Baby, the Puppet, Chica, Mangle, Bonnie, several Endo-02s, and likely many others.

The Blob's mind is that of a mindless monster reacting with simple grunts and screeches that are both deep and distorted, as well as low, mechanical-sounding snoring noises. Some theorize that this implies all of the animatronics making up the amalgamation are constantly fighting each other for control. Nevertheless, they still appear to retain a fragment of motivation, a deep desire for vengeance against William Afton.

During the fight against Burntrap, the Blob will attempt to attack the player via the manhole covers throughout the office. The player can prevent the Blob's tentacles from appearing at all by staying in a particular area of the office, or keeping Roxanne Wolf active within the office as she attacks due to the Blob appearing directly after she leaves. If the player makes contact with any of these tentacles, the Blob will jumpscare the player. The Blob can be driven away from its attack during this sequence by walking across the office inside of Glamrock Freddy, as they will retract their tentacles back into the manhole covers consequent to doing so.

Upon defeating Burntrap, the closing cinematic will play. Players see Burntrap attempting to escape the fire of his room, only for the Blob to unexpectedly descend down from the ceiling behind him and scream before using its mechanical tentacles to pull Burntrap up into the ceiling with it.

The Blob as seen in the gameplay.

The scene of the Blob about to take Burntrap.

The Blob's faceplates open, about to grab Burntrap.

One of The Blob's tentacles.

The front side view of the Blob. 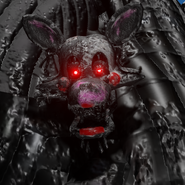 Mangle's head on the back of the Blob.

Chica's body on the front of the Blob.

Baby's face on top of the Blob. 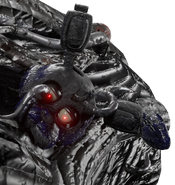 Bonnie's head on side of the Blob.

Puppet's mask as a part of the Blob.

The endo skeleton as seen at bottom parts of the Blob.

The Blob end teaser from the first episode of Freddy & Friends: On Tour!, animated.