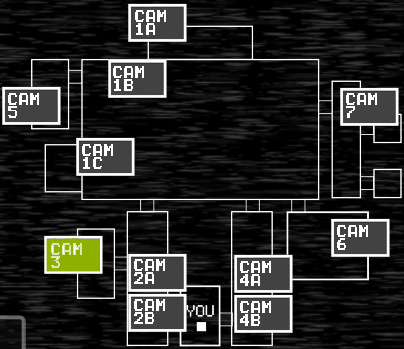 The Supply Closet is a location in Five Nights at Freddy's within Freddy Fazbear's Pizza.

Bonnie may sometimes appear here when going through the West Hall. It is the only room to seemingly have a security camera located on the ceiling, giving an overhead view of Bonnie while he is in here.

Since it only has a view of either Bonnie or nothing of any interest at all when viewed, it does not serve much of a purpose.

The Supply Closet is a small room with a shelf on the wall opposite the doorway. On the shelf are labeled bottles. On the far wall, a broom can be seen with a balled-up piece of paper sitting next to it. The far wall and the floor have the same colored tiling, except the floor's tiling is larger.

Next to the broom is a mop sitting in a bucket. Near the camera, the door can be seen, and is visibly open. On the ceiling hangs a light, which illuminates the floor below. The floor and lower parts of the wall are both made from gray and black checkered tiles.

Bonnie in the Supply Closet.
Add a photo to this gallery

Bonnie in the Supply Closet, brightened and saturated for clarity.
Add a photo to this gallery
Retrieved from "https://freddy-fazbears-pizza.fandom.com/wiki/Supply_Closet/FNaF1?oldid=3188234"
Community content is available under CC-BY-SA unless otherwise noted.