The Superstar Daycare is a large indoor playground within the Freddy Fazbear's Mega Pizzaplex where children can freely play on various structures. This room appears in Five Nights at Freddy's: Security Breach.

The Superstar Daycare is a very large play room located near the Lobby Entrance in the Pizzaplex. A "receptionary" hallway leads into the main area. It features some tables and desks, couches, a TV showcasing the SunDrop candy, as well as a golden statue of the Daycare Attendant. Further is a security desk, a slide that leads to the Play Area and a gate that leads to many party rooms and the Fazbear Theater.

The room's main features are the two very large interconnected towers of climbing structures and slides, creating a sort of network and a maze-type attraction. There are also foam shapes all over the room and cutouts of the Glamrocks are posted along the walls. The floor also appears to be made up entirely out of cushions, with also a rainbow bridge that separates the play structures and the ball pit.

The room seems to have two phases: a day phase and a night phase. During the day phase, the room is brightly lit and resembles a cheerful, "sunshine and rainbows" setting, with blue skies, clouds, and a sun. During the night phase, the room is dark, being lit only by neon star lights lining the wall with a crescent moon glowing. This phase seems to represent a sort of medieval fantasy setting, as a castle is visible on a back wall with a rotating wheel of stars.

Near the front doors, across from the ball pit that the slide drops entrants into, there is a Security Desk where a Security Badge can be found, which the Daycare Attendant tries to tell Gregory is "off limits".

Outside the Play Area

There are tables and chairs around the Play area, there is also the Boys and Girls restroom across the front door of the Play Area. This part of the daycare also has a Lucky Stars gift shop and an 2 doors leading to the Fazbear Theater on the right. On the Left, there is a Fazcade Room. (not to be confused with the other Fazcade Area) Going up the stairs leads to the party room hallway or the main entrance of the Fazbear Theater. 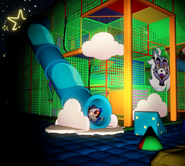 Moon going down a slide.

Sun's animated cutscene of diving into the ball pit. 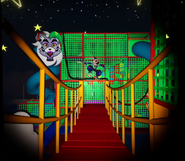 Moon on one of the play structures.

A view of one of the play structures.

A view of the slide going to the Play Area.

A security desk in the play area.

The castle prop, which is the facade of the Daycare Attendant's room.

Ditto but at it's Night Phase.

The men's room, represented by Moon.

The Sun plush gift in the fountain.

The Security Desk and TV Screen

Entrance to the Daycare