Stanley is a toy unicorn that was built by Henry for his daughter, Charlotte Emily. He was built to move on a track around her bedroom.

The Freddy Files Description: Bobbing its head like a racehorse, this white unicorn gallops on a track around Charlie's room at the touch of a button. Though he can still move, Stanley has rusted considerably after years of disuse.

Stanley was one of the first toys that Henry invented for his daughter Charlie. After he committed suicide, Charlie left Hurricane with her Aunt Jen, and all her toys, including Stanley, stayed at her father's house.

After ten years, Charlie returns to Hurricane to commemorate the anniversary of the death of Michael Brooks and the first thing she does is visit the old house of her father. There she finds Stanley along with her other toys, which had lost some paint. Later, the young woman left the house because she did not feel comfortable being there. Stanley reappears later when Charlie and John return to the house, but it is never removed from there.

A year after the events of the first book, Charlie enrolled in St. George's School, specifically in the area of ​​robotics. Just before classes begin, Charlie went to her father's house (which was damaged by a heavy storm). In that house, Stanley was there, but the storm had torn him violently from the track on which he was hooked, causing several parts of the unicorn to scatter around the room. The young woman said that she thought to take Stanley and Ella with her but finally decided to take Theodore. Later, Stanley appears again when Charlie returned for the second time, this time accompanied by John. 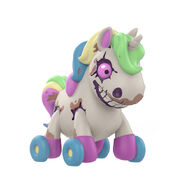