The staff bots are employee robots that are seen in the second trailer of Five Nights at Freddy's: Security Breach. One robot is delivering foods and two other robots are seen as attendants in the Freddy Fazbear's Mega Pizzaplex.

Their bodies look very segmented, with the torso being very small, and their "legs" being a tower with two large wheels, similar to Candy Cadet. The robots also seem to have the word "Staff" painted on their backs.

The service bots are robots that perform jobs as employees for human beings, serving as staffs, waiters, securities, etc. 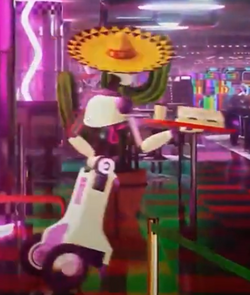 The staff bots that deliver the customers' orders. In the "tech-demo" trailer, one is seen delivering pizza, it is seen wearing a large sombrero, implying that it works in a Mexican restaurant. 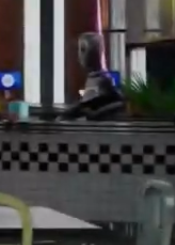 The staff bots that were employed to serve at the pizzeria. Two robots are seen as attendants in the mall, both of them have the same physical appearance.

Retrieved from "https://freddy-fazbears-pizza.fandom.com/wiki/Staff_Bots?oldid=3344363"
Community content is available under CC-BY-SA unless otherwise noted.