Shadow Freddy is a mysterious shadow variant of Freddy Fazbear that appears in the Five Nights at Freddy's series.

Shadow Freddy has exactly the same appearance as Golden Freddy's "withered" appearance, albeit being recolored dark purple. He, like other withered animatronics, is in disrepair. He entirely lacks a left ear and has many tears over his body. Unlike Golden Freddy, he has large glowing bright eyes. Furthermore, his teeth are glowing white. In Five Nights at Freddy's 3, Shadow Freddy lacks the glowing white effects for the eyes and teeth, and covered with green levels that appears to be lighting from the Office itself. Upon closer inspection, he also appears to have a wire coming out of his left eye socket.

Shadow Freddy doesn't move or even jumpscares the player, instead he (very rarely) appears in Parts/Service after every other animatronic (including Withered Foxy) has moved, sitting in the location where Withered Bonnie normally sits. If observed for too long, he will forcibly either crash the game in the original PC port, freeze the game for mobile ports, or take the player back to the menu on consoles. His behavior is very similar to Golden Freddy, except that he doesn't jumpscare or attack.

Shadow Freddy makes another minor appearance in Five Nights at Freddy's 3. In this game, he appears in the Office very rarely, and all end-of-night minigames (except after beating Night 5).

Rarely, the player may see Shadow Freddy slumped in the left-most end of the Office. This Freddy assumes the same position that Golden Freddy does in the previous games. However unlike from the second game, he doesn't cause the game to crash. This is also true for the mobile version. He also does not attack or jumpscare the player. In each end-of-night minigames (except after completing Night 5), once leaving the first screen, going into almost any other screen will trigger Shadow Freddy to appear with the text "follow me." Shadow Freddy will then lead the player to rooms from the right area until going into the room which turns out to be the Safe Room. However, upon attempting to move into that room, the player's sprite will push backward and the message "ERR" will appear in the lower left of the screen. On each four ends-of-night mini games while moving back down, William Afton will suddenly run after the animatronic, dismantling it and leaving the dismantled body on the floor.

Rather than appearing as himself, Shadow Freddy was majorly replaced with his nightmarish counterpart, Nightmare.

Shadow Freddy makes a brief appearance in Freddy Fazbear's Pizzeria Simulator, only in the beginning minigame.

In the beginning minigame, Shadow Freddy first appears in the fourth level and begins duplicating, causing the game to glitch, until a wall of sprites block the child off completely. As soon it happens, the entire minigame cuts to black, later revealing Scrap Baby's salvage scene.

However, Shadow Freddy does not directly make an appearance in the virtual-reality game. Freddy in his blacklight reskin for his Parts and Service level heavily bears a resemblance to Shadow Freddy's second game appearance; although his overall color is completely black instead of purple.

Shadow Freddy in Parts/Service, brightened.
Add a photo to this gallery

Shadow Freddy as he appeared in the Office.

Shadow Freddy's sprite for the end-of-night minigame, animated.
Add a photo to this gallery

Shadow Freddy's sprite in the starting minigame.
Add a photo to this gallery 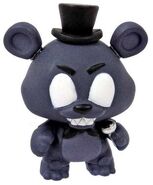 Shadow Freddy's Mystery Mini from Series 1.
Add a photo to this gallery