Not what you were looking for? See Puppet (disambiguation).

The Security Puppet is an animatronic and one of the purchasable products found in the Catalog for the main gameplay of Freddy Fazbear's Pizzeria Simulator, and its possible playable appearance in its own minigame. It is a "security"-type variant of the Puppet.

The Security Puppet's arms are covered with black and white stripes, sporting black joints, and appear to be suspended by two strings similar to an unused Five Nights at Freddy's 2 file of the original Puppet with strings. It also appears to have only one white button on the middle of its chest, with white stripes across the lower part of the torso, and its face appears to be split vertically in a fashion similar to Ennard.

The tear streaks on its face are blue instead of purple, red circular cheeks, and has a red lip from the bottom area under the mouth. A tentacle-like appendage or wisp comes out of the top of its head, with four white stripes as well as a gold bulb on the end (similar to a jester's hat, coming to a bent point, adorned with stripes and gold bells).

It also has what appears to be glitter floating around, as well as its pupil eyes being colored dandelion-yellow instead of a regular-eyed animatronic, with more circular sockets. Its present box is black with purple diagonal stripes (or maybe purple with black diagonal stripes), with red ribbons covering it vertically outside with a maroon interior.

For the third time playing the minigame, the player will see that a child is outside the building while the Puppet is trapped because of another gift box being placed on top of its box. The child will then start to jump up and down, revealing that they're the assigned child with the green security bracelet and slowly fades away as the Puppet is free and be able to move again. The player can control the Puppet to go outside but it will be slowly damaged by the rain. If the player keeps going to the right, they will encounter the assigned child's dead body but the Puppet / Security Puppet has now been severely damaged and started to crawl. Once the player has crawled up to the dead child's body, the Puppet will be deactivated and fall next to the assigned child's corpse.

Although the Security Puppet does not appear as one of the selectable characters for AI customizing in Ultimate Custom Night, it appears in the Sister Location-themed Office skin as a part of the environment.

The Security Puppet's icon in the selection menu. 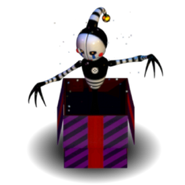 The Security Puppet's overworld self.
Add a photo to this gallery

The Security Puppet as seen in the Sister Location-themed Office.
Add a photo to this gallery
Retrieved from "https://freddy-fazbears-pizza.fandom.com/wiki/Security_Puppet?oldid=3265733"
Community content is available under CC-BY-SA unless otherwise noted.