The screampunk animatronics are steampunk-themed animatronic skin sets that appear in Five Nights at Freddy's AR: Special Delivery and became available for the Screampunk Event on June 24, 2021.

The Screampunk animatronics' design is themed around gears and machinery in a steampunk style. 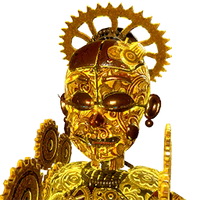 Clockwork Ballora's suit is comprised almost entirely out of golden gears, alongside brown patches that color her eyelids, eyebrows, nose, ears, cheeks and several patches of her arms. Unlike her other counterparts, Clockwork Ballora doesn't appear to have any lipstick around her mouth. Her tiara is also brown with a large golden gear attached to it. There are more gears of different proportions stuck to her elbows, shoulders and legs. The biggest gear of them all comprises her ballerina tutu, even having more smaller gears within it. Her ballerina bikini is gray while her dress and slippers are brown.

She seems to be inspired from the Indian form of classical dance known as 'Bharatnatyam' which requires efficient footwork just like ballet. Her dress and signature pose also suggests the same. 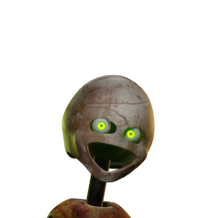 Clockwork Minireena is Minireena's screampunk skin that released alongside Clockwork Ballora on June 24, 2021. It can be considered the Minireena's first skin.

Clockwork Minireenas have a relatively similar color scheme to their original counterparts; peach bodies with their heads being white masks that cover up a gray ball-shaped neck joint, albeit slightly dirtier. While they don't seem to be comprised entirely of gears like Clockwork Ballora, they do have tiny gears attached to their elbows and kneecaps, alongside their tutus being large gears. Clockwork Minireenas have light green irises in their eyes instead of yellow ones. 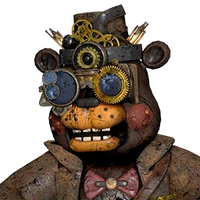 Aeronaut Toy Freddy has the same suit colors as his original counterpart, albeit slightly darker. Aeronaut Toy Freddy appears to be severely damaged, with holes in his suit and steam coming out of him. His top hat has been replaced with a hat mostly comprised of machine parts with still gears. While his blue eyes are covered by large googles, they can be seen from behind flashing in and out. The goggles themselves are inconsistent, with the left lens having two smaller lens beside it and the right lens being a partial gear, turning constantly. His bow-tie is red instead of black and his body has holes in it revealing golden gears instead of an endoskeleton. Other accessories Aeronaut Toy Freddy wears includes a gold wing-shaped emblem that reads "Special Forces", a brown satchel with a circular yellow emblem and a large brown trench coat covering up his body. Both his right arm and left foot have golden appendages on them that cover up their respective limbs. Finally, Aeronaut Toy Freddy wields a large wrench as a weapon. 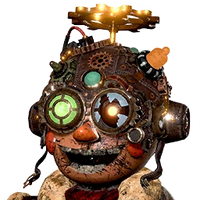 Jetpack Balloon Boy has the same suit colors as his original counterpart, albeit slightly dirtier. Like Aeronaut Toy Freddy, Jetpack Balloon Boy wears goggles, a bronze helmet and a large coat. The goggles have an inconsistent design, with the left lens being a bright green and the right lens being blue. The right lens has been almost destroyed revealing the glowing yellow irises of Jetpack Balloon Boy's eyes. The helmet has a cyan light and a bronze gear at its center, an orange light bulb on its right and a red circular wire on its left, along with the propeller itself being a large golden gear. His coat is brown with tufts of light orange fur on its end points. He also wears a red ascot and has three belts around his chest which partially block Jetpack Balloon Boy's exposed open frame. A small clock sits on the center of Jetpack Balloon Boy's body with both the hour and minute hands turning in various directions. He also wears brown pants with purple stripes and golden clad boots.

Jetpack Balloon Boy's sign says "LET'S FLY!" rather than "Balloons!". The sign is made of wood, the letters are made of silver and bronze gears reside on the front and turn occasionally. The balloon Jetpack Balloon Boy holds is made of metal. It is painted red and held together by seven different strings; one at the bottom for a person to hold and the other six pertruding off of the first and connecting to a brown curtain-like bow around the balloon. The top of the balloon is filled with steampunk gears, lights and other machinery. Jetpack Balloon Boy's gray metal jetpack is strapped to his back and has twin boosters tanked with gas, allowing him to take flight several feet into the air.