A list of animatronics who were planned to be included in the Five Nights at Freddy's games but ultimately cut during production.

The unnamed beaver animatronic was a character intended to be the main antagonist of the first game. It was replaced by Freddy Fazbear due to bearing too much resemblance to Chipper from Scott's earlier game Chipper and Sons Lumber Co.[1] Another rejected idea was to have the beaver animatronic appear as a fourth character, but was replaced by Foxy for the same reason.

A similar idea for this character was later used for El Chip, who made his debut in Freddy Fazbear's Pizzeria Simulator.

The unnamed wolf animatronic was an animatronic thought up by Scott Cawthon for the first game. At the end, the concept for this character was rejected in favor of Foxy.[1]

A similar idea was used for Twisted Wolf from The Twisted Ones novel, and Roxanne Wolf in Five Nights at Freddy's: Security Breach.

The main three animatronics' (excluding Foxy) completed textures and models exist in the files. Besides the eye texture, a texture for Blacklight Foxy's main body is completely missing from the files. 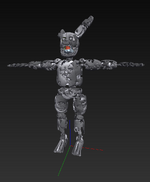 Inside the Help Wanted files, a leftover and untextured model for Springtrap can be found. Said model is also labeled "Glitchtrap".

The model has no physical differences between itself and Springtrap, with the exception of a small stitch-like indent on the upper left-hand side of his torso. It may be possible that this was supposed to be the original Glitchtrap, as it is the origin of Glitchtrap's name, but this is uncertain.

Babytrap in Help Wanted was meant to serve as Plushtrap's replacement for his Dark Rooms level segment in blacklight mode. The only evidence to support Babytrap's existence is that her name and instructions are found deep within the text string files. It is entirely possible that Babytrap was quickly scrapped for Plushbaby.

In the Curse of Dreadbear DLC game files for Help Wanted, there is a different texture for the Freddles that is left unused. They were apparently supposed to be for the "Build-a-Mangle" segment in the Spooky Mansion level (presumably Hard Mode which is not available for the Curse of Dreadbear campaign). The texture appears to look burnt, thus the name Burnt Freddles were given.

A frozen variant of a Glamrock Endo is located in the files of Security Breach. Although some body parts were found ingame, the complete model goes unused. There is also an unused side quest related to this endo, as suggested by the side dialogue between Gregory and Freddy:

From the game files for Security Breach, one of the unused collectibles is "Nightmare Helpy", implying that Helpy was intended to have a nightmare counterpart.