Not what you were looking for? See Scott Cawthon (disambiguation).

As his name suggests, he appears as the "photo" head of Scott Cawthon in real-life with a rather angry-looking expression living inside the giant, machine-like jar with three tubes. He also sports a pair of robotic claws.

The battle with Scott's Head is different from every other battle in the game given that it is in a different genre entirely. Scott's Head sits on the right side of the screen and will fire blue laser blasts from the top and bottom of his containment tube. On the top of the room is a laser sliding back and forth that will shoot a rapid succession of red bullets at random. And, as with all enemies in FNaF 57, contact with Scott's Head will cause damage.

While it can look like there is a lot happening on the screen, there is a way to simplify this fight. Using the background as a guide, if the player sits about three squares away from Scott, the blue energy bullets will be unable to hit them. The trade off, though, is they will take damage from the red laser on top of the room every time it fires above them. However, should the player come into the fight with enough health, this is a negligible risk. Also worth noting is that this spot leaves Scott within range of the level 0 blaster for players looking to unlock Coffee. 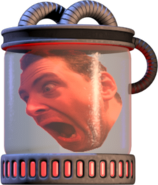 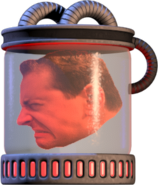 The left claw from Scott's Head (click to animate).

The right claw from Scott's Head (click to animate).

A texture for Scott's Head while talking (click to animate).