Both animatronics share the same recycled models as the classic animatronics, with designs based directly on the fairy tale Little Red Riding Hood. 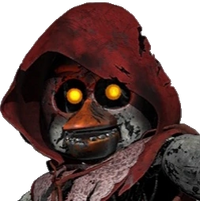 Little Red Chica is Chica's Scary Tales skin released on April 19, 2021. She is Chica's third skin, after Scorching Chica and Liberty Chica. She is based on Little Red Riding Hood, the titular character from the fairy tale of the same name.

Little Red Chica's plush suit is colored white, albeit rotten with black sludge all over it. Her eyes glow a bright orange-yellow hue, and her beak remains the same color, but withered with gray rust. A scratch mark can be seen on the right side of her beak. Little Red Chica's entire mid-section is destroyed and her endoskeleton is exposed, although the damage done to her frame is mostly covered by the red hood she's wearing. The cloak itself has several large tears in it, while the hood remains mostly intact, hanging over Little Red Chica's head. Her pants are also torn apart. She wears brown shoes with one buckle holding the shoes together.

Little Red Chica holds a large picnic basket with a red checkered blanket covering it. The Moldy Cupcake is inside. Its texture is brown with sprouts of green mold around it, and its eyes have been removed. 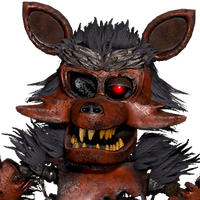 Big Bad Foxy is Foxy's Scary Tales skin that was released on April 22, 2021. He is Foxy's third skin, after Ringmaster Foxy and Radioactive Foxy. He is based on the Little Red Riding Hood story's main antagonist: the Big Bad Wolf.

Big Bad Foxy comes in two forms; as both the Big Bad Wolf and Red Riding Hood's grandma in disguise. His eyepatch is gone, revealing a gaping hole with wolf fur inside. The other open eye is black with a white pupil that can also glow red when angry. Big Bad Foxy remains red like his original counterpart, albeit a bit rusted and covered with gray wolf fur over his head, shoulders, arms, legs and even covering the entirety of his back where his tail is. Big Bad Foxy's nose now has two nostrils, and his teeth are more yellow and dirty. His signature hook remains on his right hand, while his left hand and toes have three large nails coming from the limbs.

As for Big Bad Foxy's disguise as Little Red Riding Hood's grandma, the skin remains the same aside from the disguise. The grandma costume consists of a light blue nightgown, a light blue nightcap and glasses that cover up most of his wolf features.