The Salvaging Room in Freddy Fazbear's Pizzeria Simulator consists of a room of indeterminate size where the player can salvage animatronics found in the Back Alley. The animatronics that can be salvaged are Molten Freddy, Scraptrap, Scrap Baby, and Lefty.

The Salvaging Room is dimly lit by what appears to be a single tungsten light-bulb overhead. The only things visible are a wooden table, the cassette player, the maintenance checklist, and the animatronic being salvaged. It is impossible to determine the size of the room because of the poor lighting.

Scrap Baby being salvaged in the cutscene.

Looking down in the cutscene.

Scrap Baby looking at the player. 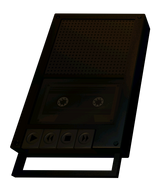 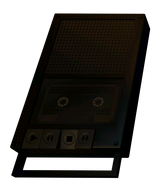 The tape recorder, fast-forwarding.
Add a photo to this gallery

Molten Freddy in his neutral state.

Molten Freddy in his attentive state.

Molten Freddy in his hostile state.

William Afton in his neutral state.

William Afton in his attentive state.

William Afton in his hostile state.

Scrap Baby in her neutral state.

Scrap Baby in her attentive state.

Scrap Baby in her hostile state.

Lefty in his neutral state.

Lefty in his attentive state.

Lefty in his hostile state.

The 'Proceed with Salvage.' button.

The 'Throw it back into the alley.' button.

The button to show the form.

The Play and Pause buttons.

The Shock button.
Add a photo to this gallery

Lefty's jumpscare.
Add a photo to this gallery

|Unused paly button.
Add a photo to this gallery