While all S.T.A.F.F. Bots vary in color scheme depending on their role, they all share the same basic design. A S.T.A.F.F. bots sports a white, ovoid-esque head, with cutouts for two white eyes with black irises; two ovals are placed on the sides of their head. A light gray, pointed decal is placed under each cutout, and a segment runs through the middle of the eye sockets. Their faces also appear to have peach pink blush circles, below their eyes. Their torso is composed of a singular, segmented metal spine, with a chest suit piece, fitted with buttons, covering half of it. The word "STAFF" is painted on the back of the chest piece, and two wires poke out of both sides of the chestpiece's lower half, which connect to their respective arm. Spherical shoulder joints connect the arms to the torso, the upper half of the arms are bare, and while the lower half is covered by a forearm suit piece, the arms end in three-fingered hands. A cylindrical waist connects both halves of the S.T.A.F.F. bot, with lights on the sides. The lower half of the S.T.A.F.F. bot is made up of one singular piece that tapers outwards, ending in two wheels.

S.T.A.F.F. bots perform jobs normally done by humans around the Pizzaplex, and can be seen working as waiters, security guards, and janitors. Most of their variants are passive, and will not attempt to hurt the player. However, Alpha S.T.A.F.F. bots will attack the player on contact, while Security Bots will alert nearby animatronics to the player's position by sounding an alarm. Cleaner Bots also alert animatronics, but only if the player gets in the way of the cleaning arm. If there are no hostile animatronics nearby, the alarm may cause one to teleport one near the player.

The Security Bots patrol Freddy Fazbear's Mega Pizzaplex during the night. These S.T.A.F.F. Bots are the most common throughout the game, and follow set patrol routes, occasionally stopping and performing a full turn before resuming their rounds. Should Gregory come within the beam of light, the Security Bot will jumpscare him and sound an alarm, alerting any nearby animatronics to his position. In the Sewers below the Pizzaplex, a withered version of the Security Bot is present, called Sewer Bot in the files.

The Map Bots are S.T.A.F.F. bots who are employed to hand out maps to customers. They have a habit of jumpscaring Gregory, though, this will not alert nearby animatronics. Instead, they will follow it up with a request for him to take a map, no longer jumpscaring him on sight.

The Mop Bots clean up around the Pizzaplex, hence their name. Unlike the other S.T.A.F.F. Bots, they are completely white.

They either stand still or roll around slowly, sweeping or mopping the ground as they do so. If Gregory comes too close to them, they will look at him and signal him to move away. If Gregory get to close to them repeatedly, the Cleaning Bot will sound an alarm, alerting nearby Glamrock Animatronics to his location.

The Party Bots are S.T.A.F.F. bots that stand in front of the entrances to certain attractions.

If Gregory has a Party Pass, they will dance around on the spot as the game prompts him to give it to them, and they will promptly disappear after receiving the Party Pass. If Gregory doesn't have a Pass though, they will stop him from entering the attraction they guard. 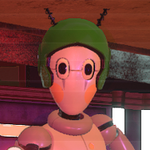 The Alien Bots are a unique variation of S.T.A.F.F. bots found exclusively in the Fazer Blast attraction. They wear a green cap with alien-like antennae. They carry standard issue Fazer Blaster laser guns.

The Comedy Bot is a S.T.A.F.F. Bot individual who can be found in the Fazbear Theater, where it will stand on stage and make jokes to the audience, also using hand gestures.

The Magician Bot is a S.T.A.F.F. Bot dressed in magician's attire complete with a top hat and a red bowtie. A broken version can be seen at the end of the Sewers.

The Driver Assist Bots are S.T.A.F.F. bots employed to help guests that are too short to drive the Karts in Roxy Raceway. They sport a white color scheme with orange accents, and are immobile, due to being connected to the Kart itself and, thus, entirely lacking a lower half. The second segment of their fingers is colored purple, and the logo for Roxy Raceway is printed on their chestpiece.

The player can find the only Driver Assist Bot on a yellow Kart near the northwest stairs, though it is missing a head which needs to be found and repaired in order for the Bot to function again, thus triggering Roxanne Wolf's boss battle.

The Instructor Bot is a unique S.T.A.F.F. bot that is employed to explain the rules of Fazer Blast. They wear a vest with a lightning bolt with a bow tie printed on it, a cap with bear's ears, and hold a Fazer Blaster.

There is presumably one Fazer Blast bot for each team, but only the orange team’s bot is seen in-game. Their dialogue refers to the opposing team as "the orange-slash-blue team", so they may be a single bot reused between teams.

The Pizza Bot, also called Chef Bot in the files, is a S.T.A.F.F. bot who is employed to make pizzas via the Freddy Fazbear's Mega Pizzaplex Quick Delivery Virtual System. and is the only S.T.A.F.F. bot variant that can be fully controlled by the player. Gregory uses this to make a pizza to distract Glamrock Chica, who attacks it in the process.

It appears to share its color scheme with the Mop Bots, though it wears a toque and a visibly dirty chef's jacket from the attack.

A pair of Attendant Bots, also known as Circus Baby Bots in the files, can be found serving ice cream and other treats at Bonnie Bowl. Other than remaining at the cash aisle, they hardly do much. A broken version of the Attendant Bot can be found at the end of the Sewers as a part of the S.T.A.F.F. Bot family.

Their design and position are loosely based on Circus Baby, in reference to her ice cream-dispensing functionality mentioned in Sister Location.

The Nanny Bot is a female S.T.A.F.F. bot dressed like a nanny, with blue hair similar to Ballora. The broken version only appears at the end of the Sewers.

In the files, a fixed version is found but was not used ingame.

The Server Bot is a S.T.A.F.F. bot that is employed to serve food to people. The Server Bot wears a blue, orange and red striped shirt, they also wear a light purple and red cap with a red and blue propeller on it. A broken version can be found at the end of the Sewers.

A fixed model of this bot can be found in the game files, but the broken version can only be seen in the Sewers. In the tech-demo, there were server bots serving meals at El Chip's and wearing a large sombreros, implying that there were originally food delivery variants of S.T.A.F.F. bots.

The Worker Bots are a type of S.T.A.F.F. bots who serve as constructors for the locations within Freddy Fazbear's Mega Pizzaplex. The Worker Bots were only seen on posters found from some maintenance and construction sites.

The Table Bots are a group of five deactivated S.T.A.F.F. Bots found in the Staffbot Silo from the Sewers. The family consists of the Magician Bot, Nanny Bot, Sales Bot, Attendant Bot, and the headless S.T.A.F.F. Bot. They are theorized to be a reference to a past group of characters, such as The Afton Family or funtime animatronics.

The third and least common interpretation of the Table Bots suggests that it represents Funtime Animatronics.