The retro minigames are hidden minigames that can be found and played in Five Nights at Freddy's 3. 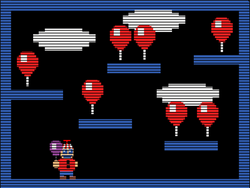 BB's Air Adventure is not a Night-Specific minigame. The player can access the minigame on any night by going to Cam 08 and double-clicking on the character drawing of BB on the left wall.

In this minigame, the player takes control of BB to collect balloons. The balloon count at the top starts at 8, but in the first room, there are 7 balloons to collect. Once these 7 balloons have all been collected in this room, an exit will appear in the form of a door. Touching this door ends the minigame, though in doing so, the player will leave 1 balloon uncollected. There is no penalty for neglecting the last balloon, but the secret portions of the level are important for unlocking other minigame aspects later in the Nights.

Another way that this minigame can end is if the player exits the starting room by jumping out of an invisible exit at the top left corner of the room. This exit option is unlocked once the player gets the 7 balloons in the first room. Once the player does this, they will fall to a black-and-white area, in which they can proceed to the left to enter another area. The next area contains three crying, silhouetted Balloon Boys near a large silhouetted structure. If the player proceeds left, they will encounter an exit in the form of a door. Touching said door ends the minigame.

A third way that this minigame can end is if the player collects the 7 balloons in the first room, then exits the starting room by jumping out of the invisible exit at the top left corner of the room. If the player has already gone through the second Exit door, red balloons should appear as static platforms underneath where BB is falling, leading to a blue platform with a child that appears to be dead. If the player walks off the right edge of this platform, they will land on another "room" with a color-changing balloon. Important: Enter the room from the bottom-left corner, otherwise the player may get caught and need to restart (F2) the game. Collecting this balloon is necessary for full progression in this minigame.

Once the player has visited the Mangle's Quest minigame (Night 2), return to BB's Air Adventure. Following the same path of the Third Ending to the platform with the child will lead to the player successfully completing the full minigame. A cake will appear once the child is approached, and the minigame will then end. The child then awakens, and one of the children in the Happiest Day minigame will be unlocked. 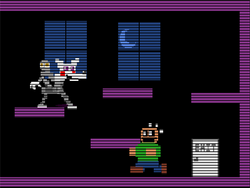 Mangle's Quest can only be accessed on Night 2 by going to Cam 07 and clicking on the top-left, then bottom-left, then top-right, then bottom-right buttons on the left (P1) side of the arcade machine.

The player must use WASD controls to control Mangle, W being the Jump button. The player must move Mangle in a platform-style minigame to collect its 4 missing parts, each worth 100 points. A big kid runs around at the bottom of the screen from left-to-right on the second and third screens of the inner room. Landing on or simply touching the kid will dismantle Mangle and end the minigame. An exit will also appear on the last segment of the inner room, and touching the door will end the minigame.

If the player has already advanced in BB's Air Adventure (Third Ending), the player will be able to exit the inner room by jumping through an invisible exit in the top-right of the inner room. Mangle will then fall a considerable distance into a majority-red atmosphere. Falling all the way will show a very tall crying Puppet silhouette (or statue) collapsed down on its knees. Going left will show red balloon platforms. Follow these red balloons, and if BB's Air Adventure has advanced to at least the Third Ending, Mangle will find a cake on the last red balloon. Touching this will end the minigame and unlock the Foxy/Mangle mask child in the Happiest Day minigame. Alternately, the player can use the Exit door on the far bottom-left of the minigame, but this will not unlock anything new in the Happiest Day minigame. 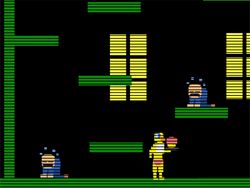 To trigger this minigame, the player must be on Night 3 and find the dark gray cupcakes with faces via the camera feeds. Clicking all of these will automatically start the minigame. The cupcakes will always appear in Cams Cam 02, Cam 03, Cam 04, and Cam 06.

In this minigame, the player takes control of Toy Chica to collect 4 different cupcakes and take them to 4 crying children wearing blue clothes. Each cupcake delivery results in a the respective child smiling and wearing a green jumpsuit. Once each child has been given a cupcake, an Exit door will appear on the lower level. Touching said door ends the minigame.

If all prior cake endings have been reached, there will be a secret way to reach another child. After giving cupcakes to all 4 children, the player can jump through an invisible hole in the wall on the top-left of the lower level (around the level transition from top-to-bottom levels). The player must land on a red balloon or will fall through to a crying cupcake and Exit door. If the player lands on the red balloon and platforms up to reach the child, and all previous minigames have resulted in their Cake Endings, Chica will provide a cake to the child, unlocking another child in the Happiest Day minigame. 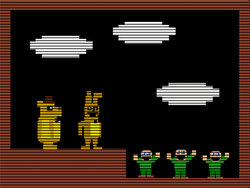 To trigger this minigame, the player must be on Night 4. Nine wall tiles in the Office are clickable and are in a dialpad-type configuration, as on a phone. These tiles are located between the box of Animatronic masks and the trashcan. Pretending that this is a dialpad, type in 3, 9, 5, 2, 4, 8. For reference, treat 3 as 'top-right'. Clicking the wall tiles in the right order will bring the player to the minigame.

In this minigame, the player takes control of Golden Freddy in a highly odd-clipping platforming game. An Exit door is present in the top-right corner of this first room, which will end the minigame.

There are actually nine rooms in this level. Golden Freddy can exit the first room by running left into the stage platform (to the left of the children). He will then "slide"/jerk through the left side of the room, then falling. The player can walk all the way to the bottom-right of the map and simply exit via an Exit door. Once in the bottom-right part of the level, follow these steps to reach the crying child:

2. Jump left into to the top-right corner of the Bottom-Center room. This will transport Golden Freddy to the top of the outside of the bottom-center room. 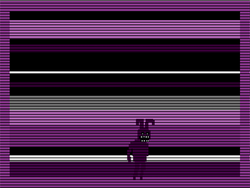 To trigger this minigame, the player must be on Night 5. There is a barely-visible figurine of Shadow Bonnie on the far right of The Office desk. If the player double-clicks on this figurine, the minigame will start.

Shadow Bonnie can fly infinitely if the player uses W, and Shadow Bonnie phase-shifts or glitches through various minigame vignettes as well as a unique purple room that can be triggered by the S key. The player can exit by going through the Exit door on the STAGE01 room of this minigame.

Happiest Day is not a Night-Specific minigame. The player can access the minigame on any night by going to CAM 3 and double-clicking on the character drawing of The Puppet on the right wall.

The player controls The Puppet, who can only walk left or right. Walking past several kids wearing animal masks, the player can go to the far right of the level to find a crying child. To the left of the table, there will be as many children wearing gray masks as have been unlocked from the other minigames. Without all five minigames completed with Cake Endings, the player can only exit via the Exit door; no cake will appear on the table unless the player has all the Cake Endings complete and runs into the table.

If the player has all five minigames beaten with their respective cake endings, there will be four children wearing Freddy, Chica, Foxy, and Bonnie masks to the left of the table. Running into the table will place a cake on the table. The crying child to the right of the table will now have a Golden Freddy mask on. All five children and the child that the player is controlling will then disappear, and their masks will fall to the ground. The six balloons will then fly upwards through the room barrier, mostly out of view. Finishing this ending will trigger a unique star to appear on the main menu, and this is saved to the game file as a unique variable signifying that the Good Ending has now been realized.

Sprite of Spring Bonnie in Stage01.

Sprite of the running child from Mangle's Quest.

The Puppet-like kid in Happiest Day.

The Golden Freddy-like kid in Happiest Day.
Add a photo to this gallery