Rare Screens and Objects are the recurring Easter eggs found throughout the first game up until Ultimate Custom Night. They appear as some form of hallucination-like events, uncommon image screens, and hidden objects that can be seen on occasions. Throughout the series, the player may experience them through camera systems, inside the Office, or outside gameplay.

The words "IT'S ME" randomly appear, in tandem with rapidly alternating images of a black-eyed version of Bonnie (with his left pupil off centered in a similar way to the medical condition strabismus, commonly known as "lazy-eye"), an eyeless version of Bonnie, and Freddy Fazbear with human eyes. Sounds taken from the Night 5 phone call accompany these hallucinations. The visual "IT'S ME" hallucinations have a 0.1% chance to appear every second.

These visions can happen at any time, even if the player is looking at the Monitor, or when the power runs out. They also occur when Golden Freddy is in the Office.

Freddy. Note the human eyes, and the blood vessels in them.

Bonnie, but with empty eye sockets.

"IT'S ME," a phrase that appears not just in hallucinations, but around the pizzeria as well.

Another shot of "IT'S ME," a phrase that appears not just in hallucinations, but around the pizzeria as well.

Rarely, in the East Hall, the posters from the wall will be replaced with drawn "IT'S ME" texts or crudely drawn faces of crying children in a similar style to that of Edvard Munch's Der Schrei der Natur. Note that such hallucinations cannot occur if Freddy or Chica is in the camera feed.

Sometimes, when Foxy has left Pirate Cove, the "Out of Order" sign will read to say "IT'S ME".

Sometimes, Endo-01 and rest of the animatronic heads from the Backstage will stare into the camera. It will only occur while Bonnie is not around in this room.

Randomly, from the East Hall corner, the "Rules for Safety" poster will sometime change to a newspaper clipping, telling the backstory of the "Missing Children Incident". There is a total of four newspaper clippings.

The poster seen in the West Hall Corner can change to an image of Freddy ripping his own head off or, rarely, Golden Freddy's close-up. Should the poster change to the latter, Golden Freddy will appear in the Office once the Monitor is pulled down.

Golden Freddy by Game Over

While on the Game Over screen, a random number between 1 and 10000 (0.01%) is rolled every second. If this number happens to be '1' on the tenth second where the game would normally return to the title screen, Golden Freddy's jumpscare will load instead of the main menu and the game will close.

There are four animatronics who have a small chance to appear on-screen:

Sometimes, a paper cutout doll may inexplicably disappear from Party Room 4 (CAM 04) and reappear in the Office, hanging on the far wall to the right of the entryway. It is unknown as to why or how this happens.

Occasionally, after the Puppet has left the Prize Corner, it may appear on the camera for very short intervals at random times. It appears in the Main Hall camera (CAM 07), usually flashing its face for short intervals, or sometimes even standing up.

On very rare occasions, the player may experience an Easter egg image of one of three eyeless animatronics, much like the eyeless Bonnie from the first game. While the images are being displayed, the sound that plays is usually the sound the Flashlight makes when it is disabled repeating itself until it's over. The animatronics that may appear are Withered Freddy, or Withered Foxy, or Toy Bonnie.

Similar to the eyeless screens from the first and second games, the player may encounter a picture of Springtrap. When starting a night, there are three images which the player can encounter. Upon closer inspection, the corpse of William Afton can be seen inside of Springtrap.

In the third screen, Springtrap can be seen almost opening his entire head in a manner similar to the Freddy poster hallucination in Five Nights at Freddy's, revealing mostly the corpse's remaining head inside the suit. The sound that plays during this is the sound byte of William killing the player in the end-of-the-night minigames.

On CAM 02 and CAM 10, the player has a rare chance of seeing the posters of Freddy change to posters of Springtrap's original counterpart Spring Bonnie. There is no known trigger for this, yet they do appear at very rare intervals. The purpose for these occurrences are unknown, as they have no known effect on gameplay. The posters return to their normal appearance when Springtrap is located on these cameras.

There are three animatronics who has a small chance to appear on-screen:

There is only one rare Easter egg, which occurs from the Bed. From the same location, a bottle of pills, a vase of flowers, or an IV drip may be seen on the bedside table located from the left.

Only two hidden animatronics (both will later appear in the Custom Night mode) can be identified:

When entering an area or booting the game, a blueprint of one of the four main animatronics will randomly appear on the screen for a minute or two.

In the Ballora Gallery location, if the player holds 0 and 1 key for 1 minute and 23 seconds, the blue screen will display. Pressing 1 will trigger strings of random counters.[1]

These rare animated scenes from the Back Alley occur after the game over, completing the shift, or booting up the game.

The One You Should Not Have Killed 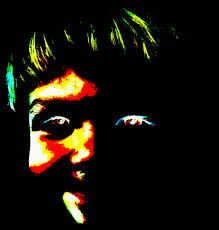 This rare screen takes the form of a mysterious image of a partially-obscured face, appearing to be that of a grinning child presumed to be named Cassidy. It is referred in game as "The one you should not have killed",[2] mentioned by Nightmare Freddy, Withered Chica, Mangle, and Jack-O-Chica. The image is actually an edited picture of one of Scott Cawthon's children.

This hallucination can occasionally appear after the Game Over screen, when pulling up the Monitor, or outside of one of the doors or vents within the Office. It bears a striking similarity to some of the rare death images from previous games, though it is unique in that it can also be seen occasionally through in-game mechanics, such as the Monitor and doors.

The animated figurines of characters from FNaF World will sometimes appear on the desk in the Office. These have included characters such as Tangle, White Rabbit, and Bouncepot.