The Protagonist is an unnamed child that appears in Five Nights at Freddy's 4.

The protagonist hides in their bedroom and must look after the nightmare animatronics from his surroundings to survive in all seven nights, from 12 to 6AM. He has fair hearing, especially when considering Nightmare Bonnie and Nightmare Chica's quiet breathing.

This 8-bit child protagonist appears in the end-of-night minigames. He lives in the house with his family, consisting of his cruel big brother and unseen parents. Unlike other protagonists of the franchise, his physical appearance is fully viewed. He has a fairly light skin tone with his face constantly stained with tears. He wears a black shirt with two lone gray stripes on it, and blue short trousers, an outfit which he wears for 6 days straight. He has constant black eyes and dark brown hair.

The end-of-night minigame after Night 5 reveals him to be the bite victim of '83, after being pushed into Fredbear's functioning mouth by his older brother and his gang from the diner.

The end-of-night minigame child curling in a ball, sobbing.

The end-of-night minigame child being picked up by his older brother and friends. 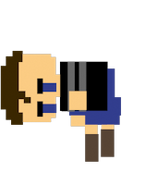 The end-of-night minigame child suspended in the mouth of Fredbear after being bitten.
Add a photo to this gallery
Retrieved from "https://freddy-fazbears-pizza.fandom.com/wiki/Protagonist_(FNaF4)?oldid=3319438"
Community content is available under CC-BY-SA unless otherwise noted.