Five Nights at Freddy's Wiki
Register
Don't have an account?
Sign In
Advertisement
in: FNAF Articles, Articles with Maintenance Issues, Stub,
and 3 more

Not what you were looking for? See The Princess.

Princess Quest is an in-universe video game franchise that appears in both the mobile port of Five Nights at Freddy's: Help Wanted and Five Nights at Freddy's: Security Breach. In the Help Wanted mobile port, the minigame can be accessed from the The Freddy Fazbear Virtual Experience's main hub room. In Security Breach, it can be accessed through an arcade cabinet.

Occasionally, a grid pattern will appear on objects at the Prize Counter. To unlock "Princess Quest", the player must zoom in on one of these glitching objects. Afterwards, the screen will fade to black and fade back to the level select with everything unlocked along with "Princess Quest" shown on the right monitor.

In Security Breach, Princess Quest returns with its two new sequels. While the first remains the same with only slight adjustments to sprite art, the other two are completely unique and introduce new mechanics. Beating all three will grant the player a secret ending in which Gregory frees Vanny of Glitchtrap's control. 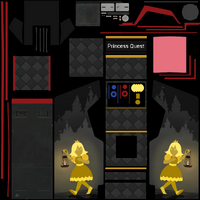 The player starts out in a room with a door that they cannot open, and they have to light all 4 torches in the next room to open the door in that room. The player will then end up in a room full of Floating Glitchtrap Heads that will attack them. After lighting those torches, they can now go into the next room and get the key, and Glitchtrap Blockers will block the door, and attack if the playable character gets too close. The Princess travels across a cemetery with tombstones before going back inside of the building to discover a purple chest with a purple key. It can unlock another door with a purple lock infested with black tentacle-like entrails. Going inside, The Princess comes face to face with a glitching purple rabbit monster, representing Glitchtrap. The game ends with text and strange audio. When the text is translated, it reads "I ALWAYS COME BACK." When the audio is reversed and sped up, it states "I ALWAYS COME BACK. LET ME OUT."

All pick-ups found in the game are found inside chests scattered throughout the castle. 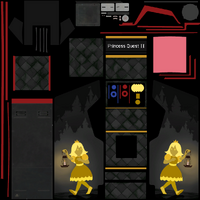 In Princess Quest 2, instead of a lantern, the princess gets a weapon called a sword of light, gifted to her by the Old Man, and the game starts off in the icy dungeon area. The game changes its genre, turning from puzzle horror game to action packed dungeon crawler. The Princess can now fight the enemies with ease because of how strong the sword of light is, as well as be given hearts to heal their health after killing them. A new puzzle mechanic is introduced where the Princess can light a red torch, creating a shadow version of herself that can mimic her movements, albeit inverted. The Shadow Princess can light purple torches. The game ends with the Old Man congratulating The Princess on completing the quest, and saying it's time for bed. Going through a glitchy purple door instead causes her to be sent to a security office akin to the original Five Nights at Freddy's.

All pickups are found in various chests. 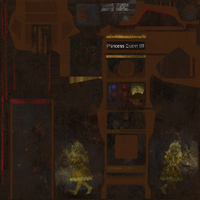 Princess Quest 3 is the most unique one, taking place in a 16-bit recreation of both Help Wanted's main hub room and the Corn Maze minigame from the Curse of Dreadbear DLC. There is also another room filled with conveyor belts and tight walk-ways, where Glitchtrap would've been. The player must find both Vanny's mask and the plushie of Glitchtrap. While the mask can be grabbed, gaining access to the plush requires lighting a purple torch as the Shadow Princess to unlock the purple chest. The player must head back to the Prize Counter and trade both items for a glitching purple key locked in a red chest. This will unlock a door in the hub room. Walking down the hallway leads the player to a large locked door; the same one from the Trapped Ending of Help Wanted. After hitting the door to open it, the screen fades to black as a loud scream is heard before the game ends and the arcade cabinet crashes, flashing "ERROR" on the screen. Completing the trilogy of games frees Vanny and leads to the Savior Ending of Security Breach.

The Princess standing in front of the locked door.

The Princess looking over a chest. 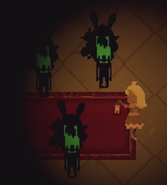 The Princess with Glitchtrap Blockers.

The Princess attacking with a sword, animated.

"I always come back" text. 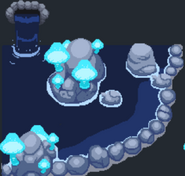 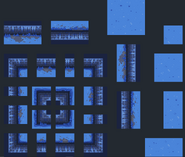 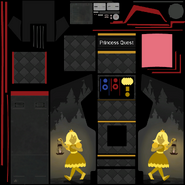