Where you looking for the Circus Control?

Primary Control Module, or simply known The Control Module, is a location in Five Nights at Freddy's: Sister Location. It is located at the center of Circus Baby's Entertainment and Rental and has crawl spaces leading to the Circus Control, Funtime Auditorium, Ballora Gallery, and Elevator.

It appears to have doors that cover the vents, these doors have yellow and black warning stripes on them. On the left wall, a clock resembling Circus Baby's face can be seen. There are elevated keypads on both sides, each with two buttons. On the left side of the room is a drawer with what three faces placed on top of it, two of them blinking rapidly. On the right side of the room is another drawer with what an strange animatronic-like Egyptian figurine on top of it. On both sides of the room are what appear to be monitors, presumably used to monitor security cameras, however they all display static. The right side of the roof also has a security camera installed. In the center of the room is a huge ventilator, with a white mask above it, which is later used by Ennard. During Night 5, the mask disappears. 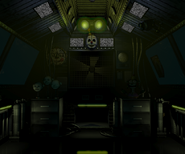 The Primary Control Module in the Extras.

The vent leading to Circus Control opening (click to animate)

The vent leading to the Ballora Gallery (click to animate).

The vent leading to the Funtime Auditorium (click to animate).

The right side of the Primary Control Module being shocked.

The left side of the Primary Control Module being shocked.

The Primary Control Module from inside Ballora Gallery.

The Control Room from Funtime Auditorium.

The blurr that is in your view in the Primary Control Room.

Unused texture of Ballora after "controlled shock".
Add a photo to this gallery

The spinning Minireena (click to animate).
Add a photo to this gallery
Retrieved from "https://freddy-fazbears-pizza.fandom.com/wiki/Primary_Control_Module?oldid=3264450"
Community content is available under CC-BY-SA unless otherwise noted.