This article lists features that were only seen in videos, teaser promotions, and screenshots in the game series but were directly changed or not featured ingame.

Seen in the game's early gameplay footage, the East Hall area was originally called "Backstage", named after another location of the same name. This early name for the East Hall was apparently an error in Scott's part.

From the game's Steam page, the night texts from the top right side of screenshots for Night 1-4 are not displayed.

Mangle with a Hook

In the game's third teaser, Mangle is shown to have a hook similar to Foxy. Although ingame, Mangle does not have a hook and instead possesses both hands.

Again in the third teaser, the original Foxy is also seen, with glossy-black eyes and glowing white pupils. However, Foxy is replaced by his previous incarnation Withered Foxy, opposed to his minor minigame appearances.

From the trailer and a series of screenshots prior to the game's release, the "Flashlight" text for the Flashlight's battery meter is absent.

In two of the Steam screenshots before the game's release, the Monitor map is unimplemented with vent paths along with both the "Play Audio" and "Map Toggle" button. However, when the audio button is used in the final game, a set of dots appears on the screen during the cooldown period before the player can use the audio again, suggesting that the feature was likely implemented, just concealed behind the dots for the screenshots. 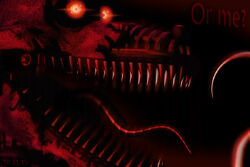 In Nightmare Foxy's teaser, he is shown to have a long metallic tongue. His tongue was never revealed in-game, aside from his appearance in the main menu screen.

Scott Cawthon revealed in his interview with Dawko that he removed the tongue from Nightmare Foxy's design because he felt it was not scary enough.[1]

In its teaser for the Halloween update of Five Nights at Freddy's 4, Nightmare Mangle is shown to be capable of hanging from the ceiling, similar to its original counterpart. It also sports many wires hanging off its body, like the original Mangle does. However, neither of these are shown in-game.

In the fourth teaser featuring the Bidybabs, it seems as though it was originally intended for there to be seven Bidybabs featured. In-game, however, there are only two Bidybabs at most, at any given time.

Bon-Bon in the Vents

Bon-Bon is shown crawling through the vents in the first teaser for Sister Location's Custom Night update, but he never does so in-game.

Funtime Freddy has a load of voicelines that were not used for the game as revealed from MatPat's livestream video with Kellen Goff. Before the livestream, Kellen Goff once refused to show off Funtime Freddy's unused dialogue lines without Scott Cawthon's permission. He also revealed in said livestream that Funtime Freddy was once intended to have a German accent, and had it been retained, Funtime Freddy would've been the only enemy animatronic with a German accent in the entire series (Lemonade Clown and Fruit Punch Clown, from Freddy Fazbear's Pizzeria Simulator, also use this accent, but it is generated through text to speech and they are not hostile). Some of the unused dialogue are alternate takes on lines that were in the final game, though most emphasized in the Custom Night dialogue. Special mention goes to Funtime Freddy's "Get ready for a surprise!", which has multiple unused versions, but only one finalized version. [2]

When the FNaF1-skinned Office is first teased, some of the posters and drawings are horizontally flipped while few objects (such as the office desk and Freddy's suit prop) are moved differently. The errors are later fixed in the Office teaser's update.

Candy Cadet from Freddy Fazbear's Pizzeria Simulator and Adventure Endo-01 are originally planned to appear in the game's character selection menu as revealed in the promotional teaser's first version. Later on, they are replaced by Withered Chica and Withered Bonnie, respectively. Candy Cadet still appeared in the FNaF1-skinned Office as one of the props, occasionally flickering with activity and speaking segments of his stories, but Adventure Endo-01 is entirely removed from the game.

Based on the first version of the game's teaser, the Freddles and Nightmare Freddy were going to have their own selection icon separately but ending up merged.

Separate Trash and the Gang

As revealed in the teasers, originally Bucket Bob, Mr. Can-Do and No. 1 Crate were supposed to be separate characters, but ended up being merged into one.

In the first trailer and one of the screenshots before the game's official release, Nightmare Fredbear's model seems to have textures resembling Nightmare Freddy, lacking his buttons. This was fixed later on during development, due to a trailer needing to be released as soon as possible. However, Nightmare Fredbear's action figure icon from the Prize Counter is left unchanged.

In a few promotional images for the game, Spring Bonnie is shown as a part of the animatronic amalgamation. The original Spring Bonnie doesn't appear ingame. A malicious software in a form of a grinning rabbit suit is a counterpart of Spring Bonnie, named Glitchtrap. In this image, Spring Bonnie was later replaced by Nightmarionne.

The Cupcake from the PAX East demo and some screenshots has a slightly different model with early color textures for the frosting and wrapper. It turns out to be a fan model made by Superkerbin on 2015, and ultimately replaced by Scott's official model a while later.

From few screenshots for the Curse of Dreadbear DLC, Dreadbear was shown appearing in Spooky Mansion's "Hallway" segment but never did ingame. 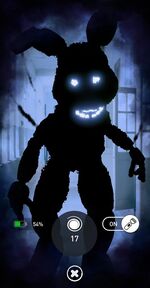 The Remnant icon image in the non-animatronic mode was originally a swirl, as seen in the sneak peak screenshot. Along with the ​​​Flashlight also having an ON/OFF caption, which has also been removed.

Retrieved from "https://freddy-fazbears-pizza.fandom.com/wiki/Pre-Release_Content?oldid=3268994"
Community content is available under CC-BY-SA unless otherwise noted.