Five Nights at Freddy's Wiki
Register
Don't have an account?
Sign In
Advertisement
in: FNAF Articles, Articles with Maintenance Issues, Stub,
and 5 more

Plushtrap Chaser is a line of animatronic toy rabbits. One of them serves as the main antagonist of Out of Stock, the third story of Fazbear Frights 2: Fetch.

Plushtrap Chasers are animatronic toys made by Fazbear Entertainment. They are dark green rabbits standing at nearly 3 feet tall in height, and bulging plastic eyes inside of wider eye sockets, giving its face a skeletal appearance. Their mouth has a row of pointed canine-like teeth and they are described as having whiskers and oversized feet.[1] To the side of their jaw lies a port where Plushtrap Chasers can be connected. They also have a hatch in the back that opens for batteries to be put in.

The Plushtrap Chaser that would become the antagonist stood out from the others. The box it was in was damaged and held together with tape. The chaser itself was remarked to look human, with cloudy green eyes and slightly yellow teeth connected to gums.

Plushtrap Chasers, in a normal state, function as an electronic toy, designed to walk in darkness and stop when lights are turned on.[2] The animatronic toy is battery powered and can seemingly be charged from the port in the jaw. Plushtrap Chasers seem built to be especially quick.

The Plushtrap Chaser featured in the story is able to mimic voices, but it is unknown if all toys are able to, or just this specific one.

The Plushtrap Chaser is Oscar's favorite Fazbear Entertainment character. Unfortunately for Oscar, they are very popular, to the point where the mall is sold out by the time Oscar can buy one. Oscar, Isaac and Raj are in a line to buy one of the toy rabbits in the mall when the last Plushtrap is bought. Oscar then overhears store employees talking about contacting the police over a "too life-like" Plushtrap that's been returned in a mangled box.

The Plushtrap Chaser remains dormant the night before Halloween. While the kids are planning their trick or treating, Oscar finds a port in Plushtrap Chaser's jaw and tries to plug it in, shorting his room's lights. Oscar leaves and locks the door, but hears Raj's voice from the dark room, seeing something move in the dark. Soon after, the neighborhood's power blacks out, and Oscar, Isaac, and Raj hear knocking from Oscar's room. They get there, and find that the Plushtrap Chaser was pounding against the door. They hear a strange grinding, and realize that Plushtrap is trying to chew the doorknob off.

Bleeding from the gums, Plushtrap Chaser chases the kids to Oscar's mom's room, where Plushtrap chews down the door again. Oscar notices that Plushtrap's teeth are sharpened from chewing down the doors, proving his suspicion that the Plushtrap had human gums and eyes. They climb on the wardrobe, which Plushtrap Chaser begins to bite down on the leg. They point a flashlight at Plushtrap, stopping it momentarily. The boys hear Raj's voice say something from the other side of the room, and Oscar turns the flashlight away from Plushtrap. The boys yell for Oscar to put the light back on it, and the Plushtrap freezes, seconds away from biting into Isaac's leg. Plushtrap Chaser pursues them through the house some more - proving itself able to mimic voices - and with none of the phones working, they decide to make a run for it outside the house, pulling the garage door open and fleeing on their bikes.

After the events of Out of Stock, Plushtrap Chaser's remains are collected by the Stitchwraith, suggesting it was one of the toys infected by Andrew. 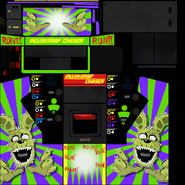 Plushtrap Chaser on an arcade machine from Security Breach.