PlushBabies are three plushy antagonists in Five Nights at Freddy's VR: Help Wanted. They are plush versions of Circus Baby, and are part of The Freddy Fazbear Virtual Experience.

The PlushBabies are plushies based on Circus Baby. They are small and white with orange hair, red noses, red cheeks, and blue eyes with eyelashes. The three are distinguished by their dress colors of red, blue, and yellow. The Blue PlushBaby has red stiching on her torso. The Yellow PlushBaby is missing her right eye.

As with the Bidybabs from Five Nights at Freddy's: Sister Location, the PlushBabies all share the same personality traits, which are uncannily similar to their primary counterpart, Circus Baby. The only difference being that their voices are much higher pitched. They are also shown to be somewhat mischievous, as evidenced by their laughter. In Curse of Dreadbear, The PlushBabies' personalities are expanded upon by the adding of the PlushKins. Their quotes in the Afraid of the Dark: Plushkin Patch, suggest that they are snippy, pushy, and childlike, in contrast to the animatronic that they are based upon.

The PlushBabies appear in their own Dark Rooms level. Numerous versions of them will appear throughout the level, at which the player must shine their flashlight on to repel as they must survive until 6AM. Failure to repel a PlushBaby in time will result in a jumpscare and a Game Over.

Several Red PlushBabies also appear in Circus Baby's Night Terrors level. When the player closes the closet doors to hide from Circus Baby, they start to twitch violently. If the player keeps the doors closed for too long, the PlushBabies will jumpscare them and end the game.

The PlushBabies returned as the PlushKins in the Curse of Dreadbear DLC, in the Plushkin Patch level, wearing masks of Freddy Fazbear, Chica, Foxy, and Balloon Boy.

In their Blacklight Level, the PlushBabies are replaced by their blacklight counterparts, the Scrap PlushBabies (or known as Blacklight PlushBaby). They are plushies based on Scrap Baby. Their appearance is more based on Scrap Baby, with more greenish eyes. Their hair has red, blue, and gray stripes through it. They have a print on their right hand representing Scrap Baby's claw. The blue variant now has more noticeable stitching on her torso, as well as some shading around her eyes. The Yellow PlushBaby, aside from missing her right eyeball, has what appears to be black liquid seeping from both eyes.

In the Curse of Dreadbear DLC, the PlushKins are the "Halloween"-themed counterpart of the original PlushBabies. Plushkins are essentially PlushBabies, but they now wear the masks of Freddy, Bonnie, Chica, Foxy, Balloon Boy and Mangle from the Trick or Treat minigame. Red eyes can be seen from the mask's eyehole.

All of the PlushBabies in the gallery (Front).

All of the PlushBabies in the gallery (Side).

All of the PlushBabies in the gallery (Back). 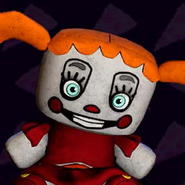 PlushBaby's icon in the gallery.
Add a photo to this gallery

All PlushBaby dolls
Add a photo to this gallery

PlushBaby with Chica Mask attacking the player, animated.
Add a photo to this gallery

The PlushBabies in one of the screenshots.

The PlushBabies in one of the screenshots.
Add a photo to this gallery 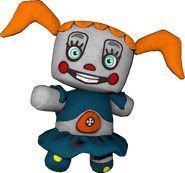 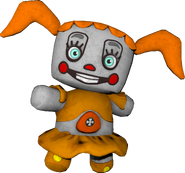 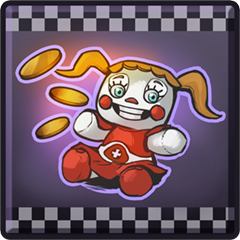 The red PlushBaby in the Play! achievement. 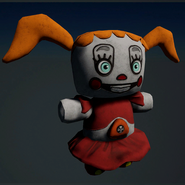 The red PlushBaby in the Prize Counter. 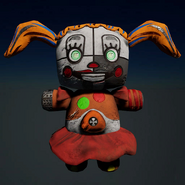 The Scrap Baby version in the Prize Counter.
Add a photo to this gallery

The scream PlushBaby emits when attacking the player.
Warning: Loud!