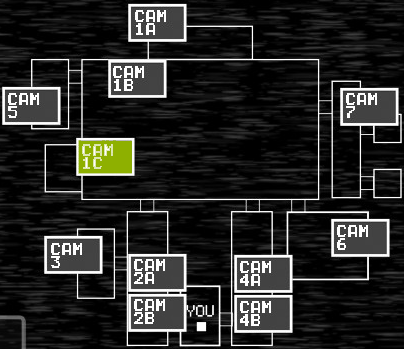 Pirate Cove is a location in Five Nights at Freddy's, an abandoned area within Freddy Fazbear's Pizza, and Foxy's starting location.

The only inhabitant of this area is Foxy. No other animatronics will be seen in this area. Foxy operates using a different mechanic than the other animatronics: if the player checks the camera for this area (CAM 1C) too much or too little, Foxy will slowly emerge from behind the curtain and sprint towards The Office, giving the player a short lapse of time to close the left door before he attacks.

Pirate Cove is closed off by a large, cylindrical, purple-colored curtain, decorated with stars and sparkles. There stands a sign, also decorated with stars, in front of the curtain that reads, "-Sorry!- Out of Order," which sometimes changes to "IT'S ME" when Foxy leaves.

Two lights can be seen on the back wall, one on either side of the curtain. There are also star decorations hanging from the ceiling, and the floor is tiled black and white.

Foxy peering out of the curtains.

Foxy right before charging to The Office.

Foxy's "IT'S ME" sign, which sometimes replaces the standard sign when Foxy escapes.
Add a photo to this gallery

Foxy peering out of the curtains, brightened for convenience.

Foxy before he starts running towards The Office, brightened and saturated for clarity.

Pirate Cove after Foxy leaves, brightened and saturated for clarity.

Foxy's "IT'S ME" sign, brightened and saturated for clarity.
Add a photo to this gallery

Foxy in Pirate Cove as seen in the Death Minigames.
Add a photo to this gallery
Retrieved from "https://freddy-fazbears-pizza.fandom.com/wiki/Pirate_Cove/FNaF1?oldid=3262441"
Community content is available under CC-BY-SA unless otherwise noted.