Phantom Freddy is an antagonist who first appeared in Five Nights at Freddy's 3. He is a burnt and ravaged hallucination of Golden Freddy from the second game.

Phantom Freddy has the same details as Golden Freddy from Five Nights at Freddy's 2, but instead has white pin-pricked pupils in his eyes like the other phantoms. He appears to be charred or burnt, possibly foreshadowing the fire that broke out in the establishment. His mouth can usually be seen hanging open. His two lower legs are never seen in the game, but through his walking animation, the lower right leg looks ripped out and torn from his body. His teeth appear to be slightly green (but this is likely down to lighting). He also has an additional wire sticking out of his left eye socket as shown in Ultimate Custom Night, which Golden Freddy didn't have.

Upon closer inspection and brightening, he appears to be colored golden or at least green, though this may simply be from his burnt appearance or the overall green hue of the game, as the other phantom animatronics share the same properties of his color scheme.

Phantom Freddy has no movement pattern, however, he can occasionally appear in the hallway, right in front of the player, slowly shuffling to the left, before ducking down, as if hiding. He then appears inside the Office, jumpscaring the player.

A very simple strategy to avoid Phantom Freddy is to simply ignore him. The player is advised not to stray away from the camera's view for too long, as this can trigger his attack. The moment the player exits the camera, Phantom Freddy can attack.

If the player stares at Springtrap without pulling up the Monitor or Maintenance Panel when he is in the window or the doorway, Phantom Freddy can attack with no warning, disabling the ventilation system.

Also, if the player is on the Monitor or Maintenance Panel, they can wait until Phantom Freddy finishes walking across the length of the window. This is recommended, as Phantom Freddy will never jumpscare the player if this is attempted, though this can prove to be a little risky, as this involves staying in the Monitor or Maintenance Panel, and the player needs to use both to locate Springtrap and reboot the systems, respectively.

Phantom Freddy returns in Ultimate Custom Night as one of the many selectable characters.

Upon active, Phantom Freddy will be noticed slowly appearing out of thin air within the Office. The player is required to flicker their flashlight rapidly (by pressing the Z button) until Phantom Freddy entirely disappears. If Phantom Freddy appear fully solid, he will jumpscare the player to black-out for temporary seconds.

The challenges in which Phantom Freddy appears are as follows:

Phantom Freddy appears in the mode FNAF 3 (VR). His role is similar to Five Nights at Freddy's 3, lurking in the hall outside the office. Unlike in Five Nights at Freddy's 3, he will not jumpscare the player if he is being stared at for too long. He also makes a cameo in Ennard's Blacklight Vent Repair level, where an enormous red version of him will walk around the background of the 2nd floor of Circus Baby's Entertainment and Rental.

Phantom Freddy halfway down the hallway outside the Office.

Phantom Freddy's animation while walking in the hallway outside the Office, animated.

Phantom Freddy ducking down, animated.
Add a photo to this gallery 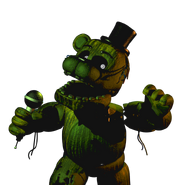 Phantom Freddy from the Extra menu, brightened and saturated for clarity.
Add a photo to this gallery 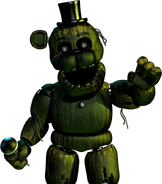 Render of Phantom Freddy standing in the Office.
Add a photo to this gallery

Phantom Freddy halfway down the hallway outside the Office.
Add a photo to this gallery