Five Nights at Freddy's Wiki
Register
Don't have an account?
Sign In
Advertisement
in: FNAF Articles, Articles with Maintenance Issues, Stub,
and 4 more

Party Bots are a guardian type of S.T.A.F.F. Bots in charge at Freddy Fazbear's Mega Pizzaplex from Five Nights at Freddy's: Security Breach.

They have Purple and white accents and their cheeks are pink. Their foreheads are darker than other S.T.A.F.F. Bots, They have a sign on it's right hand, telling the guests that they need a pass to enter the area they are guarding.

They stand in front of the entrances to certain attractions; if the player has a Party Pass, they will dance around on the spot as the game prompts the player to give it to them, and will promptly vanish after receiving the Pass. If the player doesn't have a Pass though, they will refuse them from entering.

The Party Bots are found guarding the entrances to locations including: 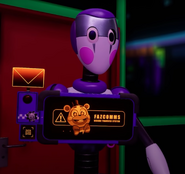 A Party Bot dancing in a countdown image posted by Steel Wool Studios.