A list of minor characters who made an extremely brief role in the Five Nights at Freddy's games or only mentioned once.

The police were mentioned twice in the Missing Children Incident newspapers. They went out investigating for the children's disappearances, and were contacted by the parents' reports when blood and mucus were noticed around the animatronics' facial parts.

The unnamed security guard is an unseen character in the second game and was only mentioned by Phone Guy on Night 1. Long before Jeremy Fitzgerald took over the job, this employee was the first security guard who finished his night-shift after a whole week at Freddy Fazbear's Pizza and complained about the pizzeria's conditions.

A total of six green-shirted children appeared in the Take Cake to the Children minigame. They reside inside a square-shaped area of the unnamed Fazbear restaurant. Playing as Freddy Fazbear, the player must walk to each child in order to keep them happy (as in, keeping their shirt color green). However, if the player neglect them by leaving them alone for too long, they will turn red as a sign of their aggravation.

As soon as William Afton kills the child from outside, the player will begin to move slower, forcing all six children to turn red before the minigame ends.

From the older version of the mobile port, there were only two children in this minigame.

The children appeared in Chica's Party minigame. The player will find at least four crying children wearing blue shirts. To cheer them up, collect all four cupcakes and feed them. Doing so will cause their shirts to turn green and smile happily. They can be also seen briefly in the Glitch Minigame.

From the earlier version of the mobile port prior to Clickteam LLC's remastered update, there are two children instead of four.

The child appears in Mangle's Quest minigame and also briefly in Glitch Minigame. The child will mostly run back and forth from the bottom of the screen, acting as an obstacle to avoid. Contacting this child will cause Mangle to dismantle, ending the minigame.

The child is completely absent in the game's older mobile edition but was re-added upon the remastered update's release.

Three children appear in the Stage01 minigame, where they cheer in front of the performace stage where Fredbear and Spring Bonnie resides. All children share the same sprites from Chica's Party minigame. They also briefly appear in the Glitch Minigame.

From the mobile port's older version, there is only one child.

The masked children were seen in the Happiest Day minigame.

All children sit next to few tables and each wear different animal masks.

It is unknown what masks the children wearing really mean or represent, although it is possibly believed that the masks represent the Mediocre Melodies animatronics but none of their masks corresponds the animatronics, saving for the pink pig mask to Pigpatch.

The Older Brother (also known as Foxybro) is the main antagonist of the end-of-night minigames. He wears a Foxy mask and a grey tank top, blue shorts, and gray shoes. 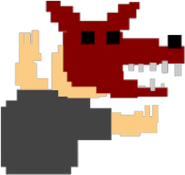 Older Brother’s friends are three secondary antagonists who appear only in the end-of-night minigame after completing Night 5.

Like the older brother, each of the trio wears a different mask based on the original animatronics: Freddy, Bonnie, and Chica.

In the post-Night 5 minigame, the Older Brother and his friends taunt the protagonist Crying Child and one of them ask about Older Brother’s young sibling being such a baby. All four older kids pick up the protagonist altogether and shoves him into Fredbear's moving mouth to give Fredbear "a kiss". The kids laugh at the child being in danger his skull gets crushed in Fredbear's mouth. All the gang went silent shocked at the realization of what they had done. 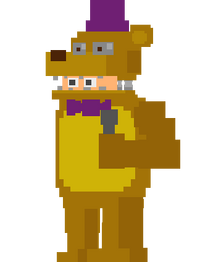 The unnamed man in Fredbear's suit is one of the employees of Fredbear's Family Diner, and only appears in the post-Night 2 minigame.

He arrives when the Crying Child walks to the right, blocking the exit door. If the child advances further to the left, the man will block the other end of the room, prompting the player to hide under the table and collapse crying.

The unnamed man in Spring Bonnie's suit is another employee who works at Fredbear's Family Diner, and appears in the post-Night 2 minigame.

He was seen if the Crying Child walks back right at the diner's entrance. From the red door, William Afton can be seen in a spare parts room, putting the employee into a suit. The door leading to the room where they at is closed shortly. It is unknown what Afton is exactly doing to the employee, either helping him to put the suit on, or killing him with springlock failures as evidenced in the post-Night 4 minigame where what appears to be brown hair sticking out from Spring Bonnie's suit.

The unnamed kid appears in the post-Night 3 minigame. They were seen outside of Fredbear's Family Diner after the player exits the restaurant. 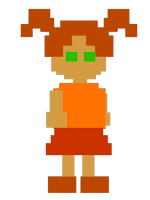 The pig-tailed girl appears in the post-Night 3 minigame.

While leaving the diner, the Crying Child will meet with the girl. She tells and warns the child about the animatronics becoming hostile at night. Then she asks why he is feeling worried, and wraps up the conversation by telling him that she will be at his upcoming party.

The unnamed laughing boy appears in the post-Night 3 minigame and he was seen sitting on the ground next to the sidewalk, laughing.

He asks the Crying Child if he is the one who constantly hides under the table while crying, then informing that no one else should be scared, and tells him to stop being a baby.

The unnamed boy holding a balloon is one of the children who appears in the post-Night 3 minigame.

The boy is found at the sidewalk next to the blue car. He asks the Crying Child if he is going to the party like everyone else, only to realize it was the child's birthday, and laughed. 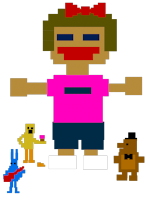 The playground girl appears in the post-Night 3 minigame. The Crying Child can meet her at the playground, where she plays with her animatronic toy figure collection of Toy Bonnie, Toy Chica, and Toy Freddy.

When speaking to her, she asks the Crying Child about why he is crying and also asks if he likes her collection.

The board member appears in the opening cutscene to the game, asking William Afton about the design decisions of the Funtime Animatronics.

The children appear in Circus Baby's Minigame, which can occur randomly after getting killed by the animatronics.

Circus Baby's goal is to feed the children with blue and green cupcakes. Doing so will make the children happy (signified by their shirt color changing from green to pink/red). Feeding all the children will successfully spawn an ice cream, which can be used to access the secret part of the minigame.

Michael Afton's neighbors appear in the minigame cutscenes after completing the difficult modes from the Custom Night.

In the first and second cutscenes, they are seen waving cheerfully while watching Michael (who was controlled by Ennard at that time) walking down the streets.

In the third cutscene, when a slightly-rotting Michael shows up, the neighbors wave at him like usual, except for one neighbor who has a bewildered expression.

In the fourth cutscene, three of the neighbors are now very concerned at seeing the advance-decomposing Michael.

In the fifth cutscene, all neighbors no longer wave anymore, and they all just stare at Michael in disturbance as they knew that Michael is drastically changing.

In the sixth cutscene, they react exactly like from the fifth cutscene, but some of them hide behind their house in dread.

In the seventh final cutscene, all neighbors now hide behind their houses in fear while the completely purple Michael is walking by.

The judges from Fifth Judical District Washington County of Uta were mentioned in lawsuit subpoenas, which were recieved if the player earns too much liability risks.

Names of individual judges include:

Various victims of Freddy Fazbear's Pizza Place were young children who have been into freak accidents or other misfortunes if the player purchase any liability-risked catalog items. Though their identities are not specified, the victims' experiences were described in the lawsuit subpoenas.

The children with color-coded bracelets appear in Security Puppet's Minigame. There are over three children, and contacting them will end the minigame.

An unnamed spokesperson and announcer appear in the trailer and the game respectively, introducing the player to the Fazbear Funtime Service and all it's animatronics.

The Fazbear Funtime Service employees are mentioned in a few e-mails, mostly going over that the animatronics had killed some of the employees, and the pay for the more normal employees.

A huge crowd of children appear once in the cinematic intro cutscene, where they cheer for the glamrock animatronic band during a concert performance.

In the Retro CDs, a total of five therapists talk to Client 71, who is Vanessa, and Client 46, whose identity is unknown.