Not what you were looking for? See Mike (disambiguation).

Mike Schmidt is the main protagonist of the first Five Nights at Freddy's game. He was a security guard employed by Freddy Fazbear's Pizza, working on a 7-night shift from midnight to 6 AM, until he was eventually fired after tampering with the animatronics. The game is played in the first-person perspective, through his eyes.

There is no possible way to see Mike's physical appearance in most of the game, as the player is forced to stay in the first-person view for its entirety except for in the Game Over screen, in which Mike can be seen stuffed into a Freddy Fazbear suit with his blue eyes and teeth visible inside of it. He is one of only two characters to show parts of his corpse, the other being William Afton in the rare Springtrap boot screens and in his vent jumpscare.

Little is known about Mike's character. The reason he would continue to work at a failing pizzeria with a high risk of death for pay at minimum wage is unknown and could possibly be attributed to either altruism, desperation, or thrill-seeking on his part. Considering Freddy's "Toreador March" is one of the main themes of the game and that it deals with thrill-seeking, the latter is somewhat more likely.

Despite the low pay and clear danger, Mike continues his job every night for the rest of the week for unknown reasons. At the end of Night 5, Mike Schmidt receives a check for $120.

At the end of Night 6, he receives a comparatively minuscule check of $120.50, an increase of fifty cents. He also receives a note from his boss, stating that he has "earned some overtime!"

Upon completing the Custom Night, he receives a notice of termination, likely due to the in-game interaction right before said night, customizing the animatronics A.I. (which the notice describes as tampering with the animatronics).

Game Over screen, brightened and saturated for clarity. 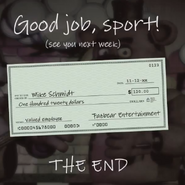