Five Nights at Freddy's Wiki
Register
Don't have an account?
Sign In
Advertisement
in: FNAF Articles, Articles with Maintenance Issues, Pages with Empty Sections,
and 3 more

Map Bots are a type of S.T.A.F.F. Bots who attends at Freddy Fazbear's Mega Pizzaplex from Five Nights at Freddy's: Security Breach.

They wear glasses and a white hat, and their chestpiece is entirely yellow, with a black lowercase "i" printed in the middle; their lower half includes two small storage folds, which contain maps.

Though their gender is identified as ambiguous, the Map Bots can speak using either a male or female voice.

The Map Bots are employed to hand out maps to customers and visitors of the Mega Pizzaplex. These S.T.A.F.F. Bots have a habit of jumpscaring the player, but this will not alert nearby animatronics. Instead, they will follow it up with a request for the player to take a map, no longer jumpscaring them on sight. When the map is taken, the Map Bot will stop following the player, disappearing later on.

Multiple Map Bots were found. One Map Bot resides next to the elevator entrance on the third floor, and will follow the player until they go up or down an escalator. Another is found in Parts and Service.

At 1:45 AM, the Map Bot will show up when Gregory attempts to leave the staff areas or the Prize Counter. The Map Bot will try to force him to take the map, only to get shoved away by Vanessa as she catches Gregory to take him to Lost & Found.

In the "Van Ending", a Map Bot is struck by the van and is pushed off the windscreen via the wipers, all the while asking for the driver to take a map. 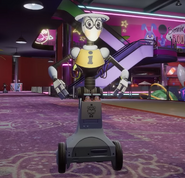 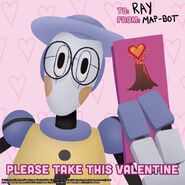