Not what you were looking for? See Mangle (disambiguation)

Mangle's Quest is one of the accessible minigames in Five Nights at Freddy's 3. It can be also played from the Extra menu.

Mangle's Quest can only be accessed on Night 2 by going to CAM 07 and clicking on the buttons on the left side of the arcade machine in the following order; top-left, bottom-left, top-right, bottom-right.

The player takes control of Mangle. The player must move Mangle in a platform-style minigame to collect its four missing parts, each worth 100 points. A large kid runs around at the bottom of the screen from left-to-right on the second and third screens of the inner room. Landing on or simply touching the kid will dismantle Mangle and end the minigame. An exit will also appear on the last segment of the inner room, and touching the door will end the minigame.

If the player has already advanced in "BB's Air Adventure" and obtained the third ending, the player will be able to exit the inner room by jumping through an invisible exit in the top-right of the inner room. Mangle will then fall a considerable distance into a majority-red atmosphere. Falling all the way will show a very tall crying Puppet silhouette (or statue) collapsed down on its knees. Going left will show red balloon platforms. Follow these red balloons, and if "BB's Air Adventure" has advanced to at least the Third Ending, Mangle will find a cake on the last red balloon. Touching this will end the minigame and unlock the Foxy mask child in the "Happiest Day" minigame. Alternately, the player can use the Exit door on the far bottom-left of the minigame, but this will not unlock anything new in the "Happiest Day" minigame.

Sprite of the running child. 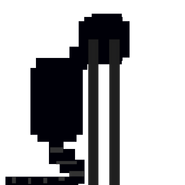