Five Nights at Freddy's Wiki
Register
Don't have an account?
Sign In
Advertisement
in: FNAF Articles, Articles with Maintenance Issues, Stub,
and 3 more

Not what you were looking for? See Music Man (disambiguation).

Lil' Music Man is a small animatronic that appears in Five Nights at Freddy's: Security Breach as a minor antagonist. He only appears in the vents.

Lil' Music Man is a small clockwork toy similar to his original counterpart, but he appears to be a lot dirtier and more broken, having a missing tooth and multiple cracked or damaged teeth. He has a wind-up key on the back of his body.

Lil' Music Man is a prototype toy of Music Man that was housed in Rockstar Row that, despite not being connected to the system, got the Glitchtrap virus and broke out. Lil' Music Man is able to climb and move freely, like his counterpart, DJ Music Man.

Lil' Music Man is unaffected by the Fazerblaster and Faz Camera if Gregory obtains it.

Lil' Music Man crawls through the vents toward Gregory. It will result in a jumpscare if he catches the player. As Lil' Music Man's movement speed is faster than Gregory's crawling speed, the player is required to sprint to avoid him.

A Dufflebag containing a message about Lil's Music Man can be found on the Warehouse side of the large metal fence. 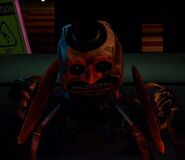 Lil' Music Man in the vents.