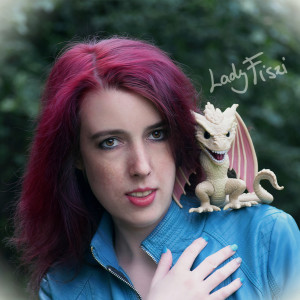 Emese Szigetvári, who is known as LadyFiszi on the site, is an official artist hired by Scott Cawthon to collaborate for the Five Nights at Freddy's franchise. She is known for making character arts for the novel trilogy, and also did some arts for the games like Freddy Fazbear's Pizzeria Simulator and Ultimate Custom Night along with another artist Claudia Schröder (PinkyPills).

In Freddy Fazbear's Pizzeria Simulator, a few arts from LadyFiszi are included. The logo, the posters in the alley and the child drawings in the office were made by her. 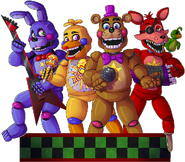 The poster is behind Scrap Baby.

The poster is next to Lefty.
Add a photo to this gallery

And in Ultimate Custom Night, she worked on the cutscenes in A Journey of Revenge. She also made all of the graphics of Funtime Chica distracting the player.

Funtime Chica when she appears randomly (Pose 4).
Add a photo to this gallery

LadyFiszi designed the Twisted Animatronics from The Twisted Ones, and had made several artworks for them for Scott to use as teasers.

The bonus poster of the Collection.
Add a photo to this gallery

In this book series, LadyFiszi made all the artworks in-between the short stories, as well as the covers of the books.

In Five Nights at Freddy's: The Freddy Files, she drew the teaser of Scrap Baby (original version) as well as Springtrap (updated version) at the end of the book.

The cover of Five Nights at Freddy's: Survival Logbook is made by LadyFiszi, as well as the destroyed Chica art in the end of the book. Not only that, she also made the artworks throughout the book, including the Foxy drawings in-between the chapters. 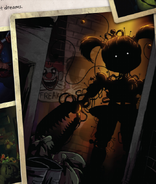 The Scrap Baby teaser in The Freddy Files.

The highly damaged Chica image in the Survival Logbook.

The Springtrap teaser in the updated Freddy Files.
Add a photo to this gallery
Retrieved from "https://freddy-fazbears-pizza.fandom.com/wiki/LadyFiszi?oldid=3253797"
Community content is available under CC-BY-SA unless otherwise noted.